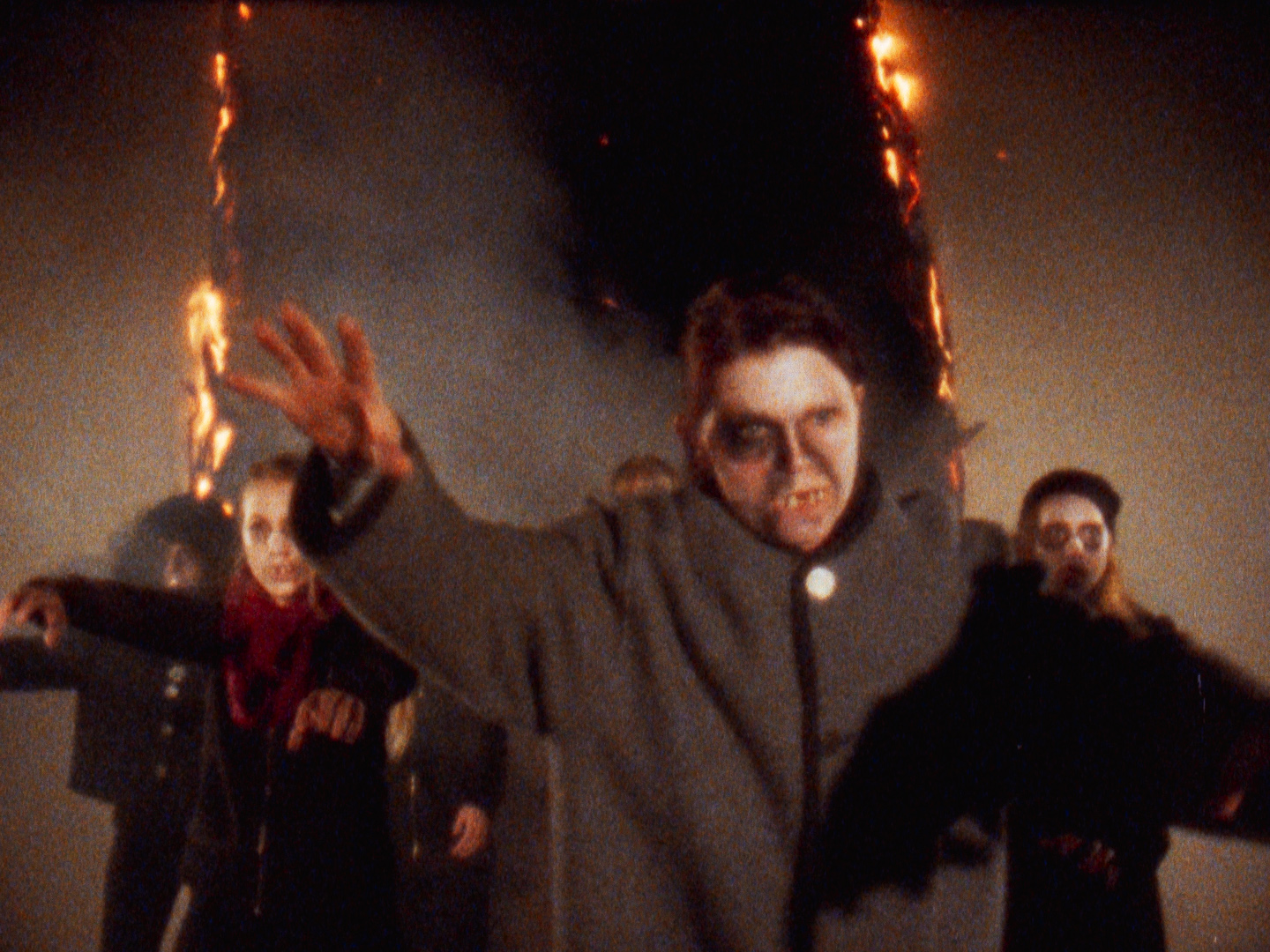 Based on the mammoth ghost novel by Austrian author and Nobel-prize winner Elfriede Jelinek, Kelly Cooper and Pavol Liska direct, write and shoot this Super 8mm moral tale of Zombies, transposed to a contemporary Austria still haunted by its Nazi past and neo-Nazi present.

The filmmakers cleverly conflate a migration satire with a ‘herimatfilm (or homeland film) a style popular in Germany, Switzerland and Austria from the 1940s until 1970s, radically rejecting classical cinema to create instead a moody meditation on contemporary Austria, co-produced by the National Theatre and The Steirischer Herbst ensemble, The disonnant sound of the brass band is as disturbing as the mannered acting, reminiscent of silent cinema, and logically complimented by Inter-titles, whilst the macabre actors mouth their words.

At the ‘Alpenrose’ guesthouse in the Austrian region of Styria, Karin Frenzel (Meier) and her mother (Kostka) are eating dinner. The two are bitter enemies, and make no secret of it, their animosity overheard by the other guests. Suddenly a group of Syrian refugees appear asking if this is a Syrian restaurant, but are turned away by the fiercely nationalistic landlord and his wife.  Soon afterwards, Karin and her mother die in a road accident. But this is not the only tragedy to occur. A distraught forester (Unterrieder) has lost his two sons, and is scouring the woods in search of them, to no avail. This home-movie horror immerses us in the universe of the text – and somewhere else at the same time. The parade of zombies in the supermarket recalls the genre films Jelinek herself mentioned as an inspiration, only giving greater credence to the sense that this blend of text, performance, and film, was a terrific idea. Meanwhile the Syrian refugees are seen transformed into zombies, along with Karin, who is chasing her double. Whilst Karin and her double fight, the innkeeper’s wife falls prey to the Syrian Zombies, who speak in lyrical verse. Back at the Alpenrose Inn, now transformed into a gastronomic Michelin star restaurant by the Syrians, Karin and her mother have it out for the last time.

An understanding of Austrian history is somehow necessary to appreciate the finer details of why the Zombies wear yellow Jewish Stars, and other emblems of the Third Reich. The inter-titles are crafted in old fashioned German script which contrasts with   banal mise en scene. Somehow, Jelinek’s anger is channelled into a bluntly outrageous film language by the debut filmmakers in their startling unsettling fantasy horror, which leaves no room for compromise. The duo are from the Nature Theater of Oklahoma, and it’s no accident that their producer is Ulrich Seidl.

Children of the Dead won the Fipresci Prize for the Forum section of the 2019 Berlinale.