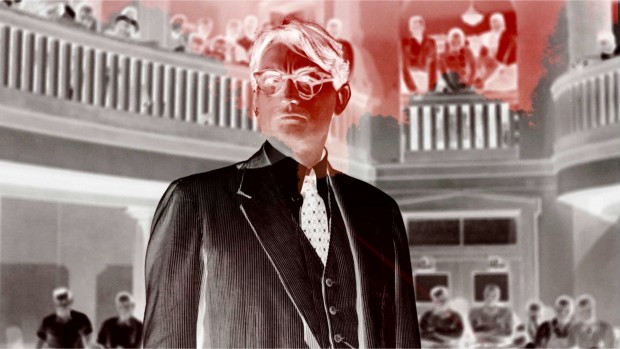 Did You Wonder Who Fired the Gun | Locarno Film Festival 2017

Travis Wilkerson investigates his great-grandfather’s killing of a black man back in 1946 and regales us with a haunting pictorial history of Black and White Alabama seething with atmospheric social unrest, and a film with one of the best soundtracks of 2017.

Calling his documentary a “white nightmare” Wilkerson certainly instills plenty of White guilt into this stylishly cinematic detective story whose important social/political theme breathes life into an incident that happened over 70 years ago, and whose implications still hold sway in today’s Trump era. The Southern states of America are still a breading ground for racial hatred and a powder keg of Black versus White conflict.

Narrated by Wilkerson in an often vehement style that sets the tone for this Southern – at times almost Gothic – tale that opens by contrasting his personal family story with that told in To Kill a Mockingbird. Tinted scarlet and orange images and remixed film clips of Gregory Peck as Atticus Finch are played as a preface to footage of an angry mob, with the words: “My great-grandfather would’ve been one of the members of that lynch mob,” It emerges that a character called S.E. Branch apparently shot and killed a black man named Bill Spann in a general store in the small town of Dothan, Alabama. Spann was reported to be robbing his shop and although Branch was charged with murder, the inquiry eventually came to nothing.

The murder investigation is somehow less engaging that the political and social story Wilkerson has to tell. We discover that Branch was not only a racist but also a bad husband who abused his wife making her sleep in a small bed next to his larger one and even trying to strangle her one night. But after talking to three sisters, who are his aunts, Wilkerson eventually discovery of Spann’s unmarked grave feels underwhelming in contrast with the more important theme of racial hatred and segregation highlighted in the film. Furthermore, one of Wilkerson’s aunts, who now works as a white supremacist activist, actually contradicts the earlier claim that Branch killed Spann for robbing his shop, claiming Spann had actually threatened a fellow black woman with a knife, and Branch shot then him in her defence. A theory that Wilkerson never seems to contradict.

However, his overlying message – that the world is threatened by White Supremacy and “the White will incinerate the World” – seems wildly overreactive. Obviously Black lives matter but Wilkerson needs gain ome perspective and to travel further afield to discover that in some countries, namely South Africa, Black people legally have the upper hand in a Black Empowerment regime. His final incendiary comment: “You fired the gun!” seems to point the finger at viewers, in a rather menacing finale.

That all said, this is an astonishing documentary enlivened by a stunning soundtrack featuring the music of Phil Ochs and punctuating by Janelle Monae’s percussive protest song “Hell You Talmbout” “Say his name, say his name!,” And despite Wilkerson’s failure to reach a satisfactory conclusion to the story of his forefather,  DO YOU WONDER WHO FIRED THE GUN provides a memorable and engrossing watch. MT