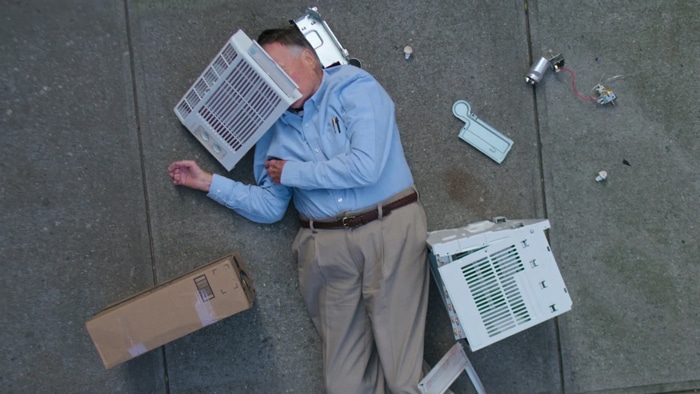 US documentary filmmaker and FEMIS graduate Kirsten Johnson (Cameraperson) has directed – as well as co-written and co-produced – an usual escapist style movie that imagines the death of her father Richard Johnson MD, a psychiatrist born in 1932.

Upbeat and innovative it may be as a piece of entertainment, but as a documentary the film’s title is misleading – Mr. Johnson is still alive and kicking, albeit suffering advanced dementia – which sees the interests of filmmaker Kirsten Johnson and the dutiful daughter probably collide. However stunning the outcome, questions should be asked. There is much to admire in this father/daughter ‘co-production’, the family history is fraught with sadness and poignancy, Kirsten’s mother suffered dementia and died in a care home, a move she resisted vehemently. As a devotee of several memory theories, this illness seems all the more tragic. Kirsten shows us a short video and has to confess that “After thirty years of being a filmmaker, this is all I have left of my mother”. Kirsten’s grandmother was killed on the day of her daughter’s graduation, sitting next to her on the passenger seat of her car. Kirsten muses about the impact this accident had on her own mother’s life.

Growing up in California Kristen would spend every Saturday of in church, her parents were passionate Seventh Day Adventists – the religion forbade, among other things, cinema visits. But when her father took her to Young Frankenstein (1974), she was hooked for good.

Taking her father plus crew on the road, they visit Loma Linda, California, where Dr. Johnson meets up with his college sweetheart, (another Adventist). Both discuss the subject of death, and feeling comforted by their belief in the resurrection. Which leads us to another major part of the feature: Heaven, realised in a colourful sequence where the”deceased” psychiatrist gets to have his cake and eat it, quite literally, as Jesus washes his feet.

A move to New York is inevitable as Dicks’ condition deteriorates, and most of us with empathise with his regret over selling the memory-filled family home. But he is philosophical and accepts his new life in the spare room of Kirsten’s flat, her husbands, and two children live nearby.

Once in the city, Kirsten (and her stuntmen) try their very best to enact Dick’s spectacular deaths – being hit by a metal fan unit falling from great height is one, falling down a steep wooden staircase and cracking his head open (with ample blood-spill) is another, but the scenario involving a knife and copious blood is possibly the most shocking, Dick freely admitting the pain was worse than his heart-attack thirty years previously.

These scenes might be impressive in their own way – and we learn a lot about how stunts work – but they do disturb Richard, and undoubtedly those affected (for me it brought back memories of finding my blood-soaked mother lying dead on a wooden floor, her scull fractured in twenty places). Let’s just remember that Dick is suffering from the disorientating effects of dementia and all the impairments involved.

We then watch an ambulance pull up and witness Dick’s cardiac arrest – or so we are led to believe. At a ‘funeral’ and 86th birthday celebration friends and patients pay their respects with tearful speeches in a packed church. One woman recalls her final meeting with the Doc, when he ‘forgot’ the recent death of her own husband (“The loss of memory is a great loss”). A close friend blows a Jewish ram’s horn in a pitiful goodbye, before he breaks down sobbing, unable to continue. Meanwhile Dick is alive and well and gleefully watching proceedings from a ‘peephole’ in the Vestry.

All this raises serious issues, Apart from these gruesome ‘serial’ deaths poor Dick is subject to during the shoot, there is the ethical question of how much the filmmaker must manipulate reality in order to pull off the ‘comedy’. As her father Dick is was certainly anxious to please her, and is totally under her power, desperate to avoid the same fate as his wife.

But you can’t help feeling Dick has been hoodwinked in some way, and that Kirsten has played with the audience’s emotions, making a mockery of the term documentary – which even at its best is hardly an objective art. Despite all these concerns, Dick Johnson is Dead is not a morose movie with its tour-de-force of compelling images but one that raises some serious issues, particularly regarding filmmaker responsibility. This is a slick and glibly amusing film but one that pokes fun at life-limiting illness. Rather like the blindfolded man whose disorientation raises a titter amongst his amused bystanders, Johnson’s film is a frivolous piece of escapism, but if we laugh, do we laugh in shame?. AS