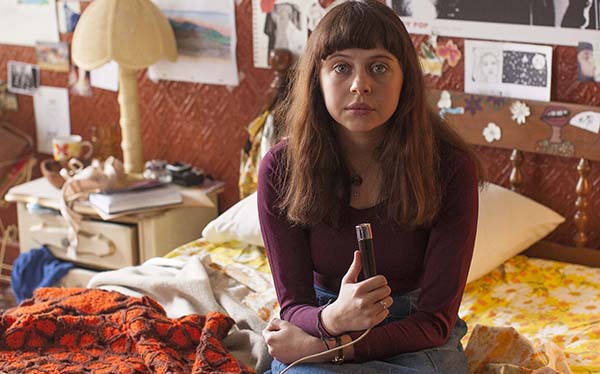 Edinburgh—Marielle Heller’s feature debut received its UK premiere in the aptly named ‘American Dreams’ section of the world’s longest continually running film festival. THE DIARY OF A TEENAGE GIRL is a tonally and emotionally complex rendering of a much-mined but often-misunderstood theme, namely female adolescent sexuality. Seen and narrated through the colourful prism of protagonist Minnie Goetz (Bel Powley), a precocious 15-year-old who embarks upon an affair with Monroe (Alexander Skarsgård), her mother’s (Kirsten Wiig) boyfriend, this coming-of-age drama is all the more unsettling for unfolding as a casual comedy, as the deeper ramifications of the ongoing affair at its centre are for the most part kept at bay.

Adapted from Phoebe Gloeckner’s graphic novel, DIARY takes place in 1970s San Francisco, and employs its setting’s clichés (libertarianism, sexual experimentation, acid trips and so on) as a familiar backdrop only to lend it a new edge by the young filter through which its events are narrated (possibly unreliably). “I had sex today. Holy shit!” chimes the opening line, and the film, mirroring Minnie’s own impressionable, passionate imagination, barely stops to ponder the hurt and confusion that inevitably stems from an underage teenager finding herself romantically involved with a man twice her age.

Bechdel schmechdel: as if to make a point of the inefficacy of standardising feminist forms of filmmaking, Heller invests so heavily in her protagonist’s mindset that there’s not one instance here of a girl-to-girl chat that doesn’t centre in some way around a man. As an audience removed from the film’s timeframe by four decades, but one who might still relate to the universal truths of growing up, we have to buy into Heller’s vision or we’re alienated from the start. For Minnie, the only thing that matters is her approaching adulthood—something that finds its ultimate meaning in the sexual pursuit of an older man. Dues to Heller, though, for scraping a great deal of humour from these otherwise complicated moments—and for doing so in an involving rather than ironic way. One need only imagine the same material in the hands of, say, Todd Solondz to see the strength and audacity of Heller’s approach.

A lot of this rests on the characters and how they’re played. Powley, best known to British audiences for her role in the first two seasons of CBBC series M.I. High, was 21 when filming began, though she’s a fine fit here, excelling as a woman happily swept into a myopic navel-gazing rather than a fully formed, satisfying emotional connection to someone (hence the childlike voiceover, and the animated interludes). Heller does well not to vilify Monroe even while making it clear that he’s a bit of a lout and no real prospect for Charlotte, Minnie’s mother, never mind Minnie herself. Skarsgård gives a delicate rendition, and it’s to his and the filmmakers’ credit that the character comes across as an ordinary rather than a monstrous guy, his deeds the result of gross misjudgement rather than predatory instinct.

The film’s biggest weakness might be Charlotte. Wiig does what she can here, but in spending much less time on her, Heller fails to elevate the character above a chain-smoking divorcee, a 1970s stereotype. It’s in the dialogue, mostly: throwing accusations of “bourgeois… fascist, misogynistic bullshit” around freely, Charlotte is painted in broad brushstrokes in comparison to the more pointillist construction of Minnie. Rather than fulfilling the requisites of a genuinely moving drama, it keeps the film rooted to a diaristic dispatch. MICHAEL PATTISON