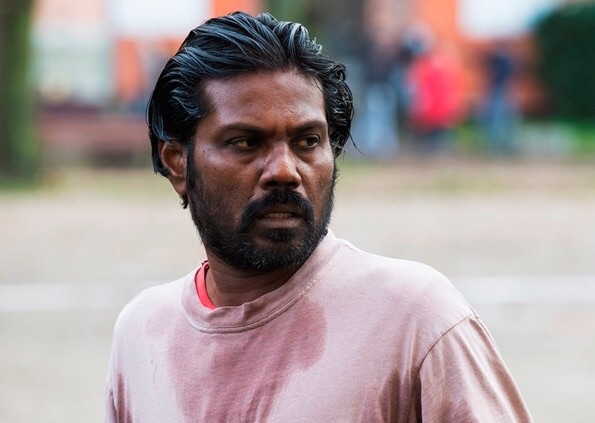 Jacques Audiard’s searing social realism has won him much acclaim with hits such as A Prophet and Rust and Bone, With Dheepan he delivers another   fraught drama about an immigrant family who bring their fierce loyalties to one another, and their religious convictions into the grim context of a strife-ridden community of outsiders who have recently arrived in Paris.

Shock and austerity greet them in a place thousands of miles from the soft jungles of Sri Lanka where the Tamil Tigers have taught them how to fight tooth and nail for their beliefs. But the struggle in their new home requires a more subtle form of combat. Suffused with images of the Hindu God Ganesh and sacred Indian elephants, who protect them during the night, daytime sees them facing a sombre scenario of inter-racial strife.

Audiard sets the scene in wartorn Sri Lanka where corpses are being burned after another incursion in Dheepan’s local village. Dheepan (Antonythasan Jesuthasan) and his friend Yalini (Kalieaswari Srinivasan manage to flee by proceeding passports from three of the dead and arrive with an orphaned child, Illayaal (Claudine Vinasithamby), having passed through immigration, . an interpreter reinventing their unconvincing story so that the two can gain employment as caretakers in a block of council houses. There they meet Youssouf (Marc Zinga) who shows them the ropes of how to get by in their new environment, but their language skills are non-existent. Working as cleaners for another immigrant who is crippled and mostly bedridden, they settle in gradually. Illayaal is allotted a place in a special needs class at school, along with other immigrant children still learning French, but young kids always manage to cope better than the adults.

Using a cast of newcomers, Audiard paints his humanistic study of everyday migration with a colourful palette of vibrant colours redolent of the exotic spice island back home. With the support of regular co-writer Thomas Bidegain, and cinematographer Eponime Menonceau, he also injects a vibe of simmering social unrest to this outwardly cohesive picture of a dislocated community. Despite their surface cooperation and acceptance of the situation, trouble is clearly brewing as racial conflicts emerge, and the mesmerising finale unspools in a way that we could never have anticipated.

Once again, Audiard handles his subject-matter with the dexterity of a seasoned filmmaker evoking his central character as a man of pure instinct, trained as a soldier and operating from a professional point view, while also being an insecure and, clearly, disorientated human being away from home.

Antonythasan Jesuthasan brings a freshness and authenticity to his debut role, and we feel for him. Worth noting is the fact that he is also a real life writer and activist who has been personally been involved with the Tamil Tigers. There’s nothing particularly new or noteworthy about Dheepan, it’s consistent, well-made and watchable, but why it won the Palme D’Or in a competition which boasted memorable features such as Carol, The Lobster, Son of Saul and Youth – while this is almost forgotten –  still remains a mystery. MT