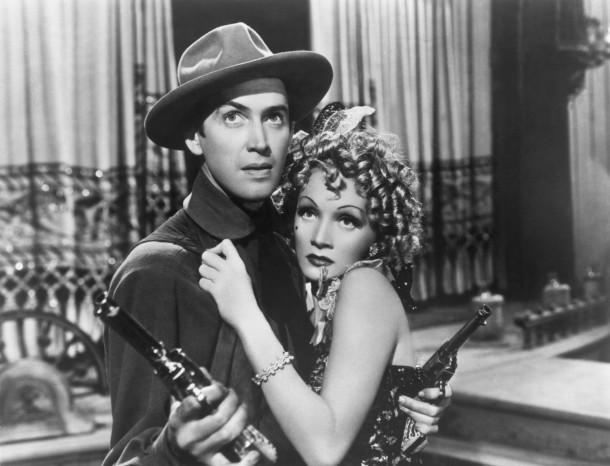 After starring in seven films directed by Joseph von Sternberg between 1930 (Blue Angel) and 1935 (The Devil is a Woman), Marlene Dietrich’s career seemed to be over: she was declared “Box Office Poison” in Hollywood, after her last failure in Lubitsch’ Angel in 1937. But she re-invented herself with the role of the tough saloon singer Frenchy in George Marshall’s Destry Rides Again, based on a Max Brand’s novel, which was filmed first in 1932 with Tom Mix, and again directed by Marshall in 1954 with Audie Murphy.

Kent (Donlevy), a crooked saloon owner, is running the town of Bottleneck with mayor Hiram Slade (Hinds), and when Sheriff Keogh asks one question too many, Kent has him killed. The mayor appoints the permanently drunk Wash Dismdale (Winninger) as the new sheriff, but has not reckoned with his choice of deputy: Tom Destry (Stewart), son of a famous gunfighter. Tom seems to be at odds with the rough town: he drinks milk in the saloon, and is so naïve he doesn’t even carry a gun. Nevertheless, Frenchy, singer and main attraction of the saloon, falls for him, even though she is Kent’s girl. But when is rebuffed at first, she tries to make his life hell on earth.. But after Tom turns out to have inherited his shooting skills from his Dad, their romance blossoms until tragedy strikes..

At the age of 38, Dietrich was alluring as ever and her comeback was well deserved. The way she played Frenchy is seen as a role model for Madeline Kane in Blazing Saddles. There were some problems with the censors who did not like the vicious catfight between Dietrich and Una Merkel’s Lilly Belle. DoP Hal Mohr (The Wild One), a veteran – like Marshall (The Blue Dahlia) – who started his career in the Silent Film era, creates lively images, alternating between great panorama shots, and impressive close ups. But the main attraction is the chemistry between Stewart and Dietrich, which carried on – very well reported by the gossip press – off screen. AS

NOW AVAILABLE ON DVD AS A BOX SET WITH SHENANDOAH, THE MAN FROM LARAMIE, TWO ROAD TOGETHER | DVD