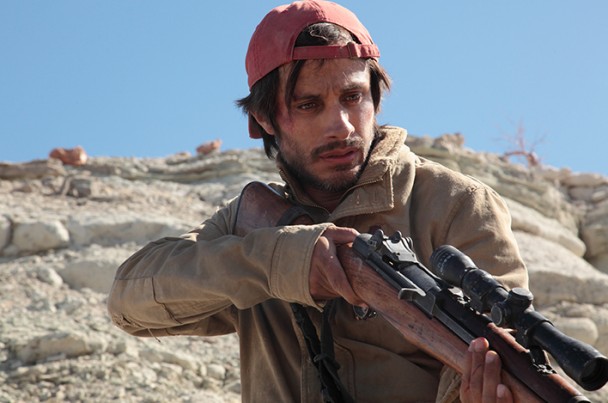 Jonas Cuaron’s starkly magnificent but rather formulaic second feature shows that migrants can be just as aggressive as those whose borders they seek to cross. DESIERTO is a newsworthy arthouse piece that arrives just as the transmigration theme is bubbling up in every corner of the world. It’s a pity then that the narrative feels so reductive and deliberately provocative with so few surprises up its dusty sleeve. The young director’s last project was Year of the Nail but he recently co-wrote Gravity with his father Alfonso and this distinctly US indie-feeling drama has the same feel of otherworldly alienation to it: barbed-wire, dangerous snakes and thorny vegetation coalesce to create a setting that is both inhospitable and strangely alluring in its pared-down beauty. Damian Garcia’s visuals capture the laser-sharp luminescence of the clinical light levels that appear to cleanse any humane quality from the surface of its sterile landscape, not altogether dissimilar to that of Space.

Essentially a two-hander, DESIERTO stars Jeffrey Dean Morgan as Sam, a disenchanted US loner who has a certain elegance about him suggestive of some recent fall from grace. In his well-equpped truck, he has resorted to patrolling the hostile expanses of the arid wilderness between the Mexican and US borders, armed with his rifle and his trusty dog ‘Tracker’, who is trained to kill.

The characters here are all disenfranchised and Cuaron makes no attempt to have us warm to any of them: they are merely ‘the hunter’ and ‘the hunted’ and eventually we know exactly what is going to happen. As a group of young Mexicans venture across the border terrain from a broken-down truck, Sam picks them off with his powerful rifle, one by one,  or they are savaged by Tracker, until only two remain: Garcia Bernal’s Moises and a young woman, Adela (Alondra Hidalgo). Moises has been across the border before, but why he has not stayed in the US is left in the ether, although he does have a young son in the US, who he hopes to join. But Sam is not the only hard-nosed character here: when Maria is wounded, Moises leaves her by the roadside to die, callously claiming that he has a greater right to survive because of his son.

As a pounding electronic score beats down there are some deftly choreographed action scenes as this cat and mouse affair plays out in the searing heat of this sun-baked rockface, Death Valley-style (this is actually Baja California). DESIERTO leaves us meditating on the epithet ‘the grass is always greener on the other side’. But is this always the case? Economically wealthy countries appeal to those from poorer ones, seemingly offering Nirvana, but disappointment often ensues. Often life is far tougher is tougher in way that migrants hadn’t bargained for: loneliness, social isolation and other danger scan make them question whether to return to the warmth of their families in their less affluent homes where the enemy is ‘outside’ rather than ‘in’. Jonas Cuaron DESIERTO  could stand is a metaphor for modern life: that it can be tough for different reasons, whichever side of the fence you inhabit. MT