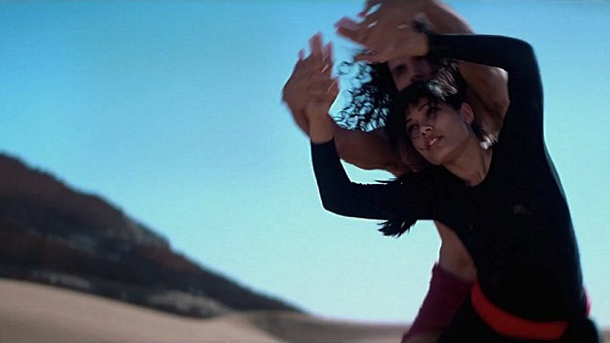 Iranian dancer Afshin Ghaffarian fled to Paris in 2009 and his biopic from first time writer\director Richard Raymond’s is straight from the heart. Some may find the film’s directness reductive, but the narrative deals with young, rebellious students and detachment and reasoning are not their strength.

Since the Iranian ‘Revolution’ of 1979, dancing is forbidden under Islamic law, even though it was allowed up til then. As recently as 2014, six Iranian teenagers were punished with 91 lashes for dancing to Pharrell Williams’ ‘Happy’ on a YouTube video. The young Afshin (Gabriel Senior) grows up in this repressive climate, just copying some moves from a bootleg DVD of Dirty Dancing. Afshin is by a supportive teacher Mehdi (Khoury), who runs an independent school in their hometown of Mashhad, and allows him to express himself in front of an audience. Mehdi also exposes his young audience to western theatre, literature and music – even though the co-ed classes might not be particularly realistic.

When Afshin (now played by Ritchie) is a first year student at Tehran University, he meets fellow students in an illegal techno dance club (situated far underground to make the point) and they start a dance group, rehearsing in an abandoned print press. Afshin falls in love with Elaheh (Pinto), the daughter of a dancer with the Iranian National Ballet, who had to stop dancing after 1979, putting all her energy into teaching her daughter, before overdosing on heroin. Elaheh is far better trained than Afshin and she becomes his teacher. Unfortunately, she is also drug dependent; Afshin helping her to break the dependency. One member of the underground group is the polite engineer student Mehran (Abedi-Amin), whose brother is part of a gang of clerical thugs who terrorise the students with batons and knives.

Mehran’s brother finds out about the dance troupe’s plan to put on a performance for a selected audience in the desert – but and he sends him to a place far away from the actual performance. Forced to leave university, he tells Afshin “it was worth it, for one afternoon of freedom”. After Afshin is arrested at a pro Mousavi demonstration, Mehran’s brother makes an attempt to murder him and it becomes clear that he must find a way out of country.

Raymond is very successful in portraying the conspiratorial underground scene of the students: whilst the fear is palpable, there is also a good deal of daring. To criticise this as simplistic is missing the point: young people in any dictatorship – particularly this cultural oppression in Iran – do react simply with gut feeling and this is not a well thought out strategy. To provoke the authorities, kids go for maximum effect, choosing the most apparent examples of the forbidden culture; even if Dirty Dancing and other example of mainstream western culture are objectively not as daring as the would-revolutionaries in Iran think. The dance scenes in the desert are the highpoint of this drama: not just because of  Afshin and Elaheh’s passionate dancing, but also the rapt attention of the audience, who, like the dancers, were very much aware of the dangers. DOP Carlos Catalan vibrant visuals help to recreate an atmosphere of unbridled rebellion in a climate of open brutality created by the clerical wing of fundamentalism. The shots in the underground venues and the close-ups with the main couple are particularly impressive making DESERT DANCER entertaining as well as valuable from the insight it offers. AS