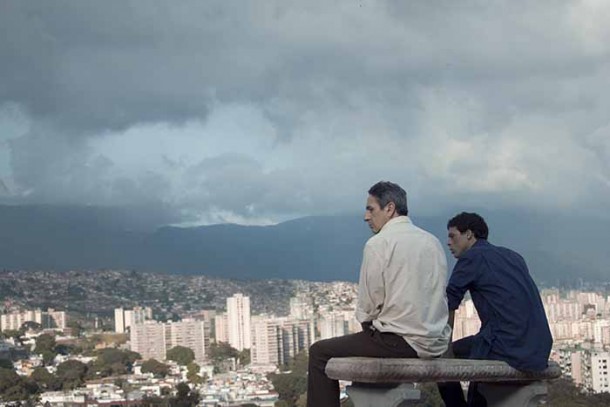 The feature film debut of director Lorenzo Vigas, who has created a body of documentaries, is a small but well- observed drama set in the violent environment of Caracas and is based on a story by Guillermo Arriaga.

Armando (Castro) is a well-to-do but lonely man in his fifties resigned to his lucrative work a dental laboratory. At an encounter with his middle-aged sister, who is planning to adopt a child with her husband, we meet Armando for the first time agitated at his father’s return from abroad; his sister attempting to keep the peace. It never emerges what Armando’s issue is with his father (who we see a few times in the distance), but these negative feelings seep into his life. Sometimes he pays for a young male prostitute, but the sexual experience is more voyeuristic than anything else – until he meets the young Elder (Silva), who beats him up. Strangely, Armando seems to return for more punishment, until we begin to understand that the older man is trying to use Elder to revenge his father. Eventually passionate sex occurs but Armando warns Elder “not to get too close”, a warning Elder, who is looking for a father figure, after his mother had rejected him as a ‘faggot’, does not take seriously. The clever twist in the tale lies in the ambiguity between the two men: what appears as a tale of sexual awakening turns out to be something quite different and intriguing.

Castro is well cast as the loner who is single-mindedly focused on his own revenge: his Armando is a distracted avoidant, wrapped in his own world, alone at work and in his flat, a subdued retreat full of books and records. Elder, on the other hand, is full of contradictions: his violence is a defensive mechanism, ashamed of his tender feelings for Armando, he compensates with a macho role when he is with his friends. Vigas evokes a threatening sense of place in the Venezuelan capital where violence and alienation of the young and poor, dominate. Somehow, Armando’s psychopathic tendencies gradually emerge and it is clear that his relationships have all being tainted by his hatred for his father but his reaction to Elder comes as a complete surprise. Cinematographer Sergio Armstrong (NO) creates a sense of alienation and detachment with his washed out and torpid palette of sombre olive green and teal. A subtle and expertly-performed character study from veteran Alfredo Castro (The Club, Tony Manero) and newcomer Luis Silva. AS