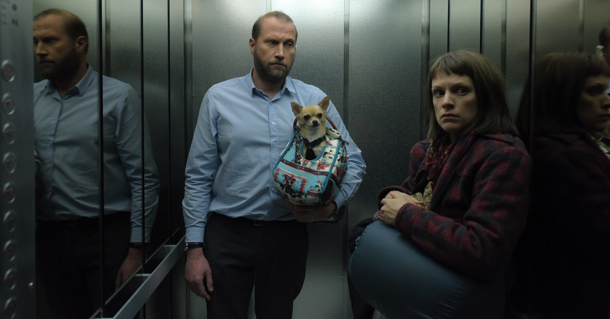 When Francois Damiens floats in from Space to his comfortable flat in Brussels, we immediately warm to his laid-back character: a philosophical, divorced dad and the star turn of Dominik Moll’s latest (but not weirdest) comedy feature.

As Philippe Mars he makes the best of his tedious life fathering two insolent kids and ocassionally watching his anchorwoman ex wife on the television. Good-natured in the extreme he’s the sort of guy who picks up the dogpoo left by wayward pooches and makes light of it. And when his work colleague accidentally chops his ear off with a meat cleaver, he’s also the sort who lets this colleague overstay his welcome in the spare room, after he breaks out of his mental hospital on the auspices of feeling uncomfortable amongst the other weirdos. But gradually it takes this sort of psychotic psychopath to bring Mars to his senses and say goodbye to his mediocre existence and realise: there’s more to life than this.

Sharply scripted by co-writer Gilles Marchand to highlight today’s more irritating aspects, this surreal and seriously hilarious Belgian French affair will go down well with audiences everywhere. Some poetic realist touches (his dead mum and dad are often beamed up in miniature, offering warm parental advice), and dream sequences where he floats in a spacesuit  add to upbeat absurdity of it all and show that Mars’ life is spiralling seriously out of control, as he rapidly becomes a doormat to all and sundry; including his sister and his unwelcome guest’s new girlfriend Chloe (Baetens), an animal activist who joins in the rampant abuse of his kindness.

Practically everyone in his Mars’ life has personality disorders, but Mars just tolerates them all good-naturedly, allowing them to exploit him at every turn: his precocious daughter Sarah (Jeanne Guittet) tells him to ‘get a life’, his son Gregoire (Tom Rivoire) turns vegetarian and barely congratulates him on his 49th birthday, his sister drops her dog off against his wishes and his boss (Julien Sibre) knows Philippe asks him to share his office with troubled misfit Jerome (Vincent Macaigne/Eden), which leads to the ear incident (he carries the meat cleaver to ‘calm him’ but clearly this fails to work.). And as a final indignity he’s forced to pussyfoot around the courting couple of Peta-style activists in his own home. But when these animal lovers announce they are planning to blow up a nearby poultry-processing plant, Mars puts his foot down.

Moll’s dramady soon descends into a delicious dark comedy with cartoonish moments as the entire crew, including the downstairs neighbour (who used to be Valerie Giscard d’Estaing’s chauffeur), head off to boycott the new factory. NEWS FROM THE PLANET MARS is a cheery crowd-pleaser loud that is all about a decent man retrieving his rightful place as head of his family. MT