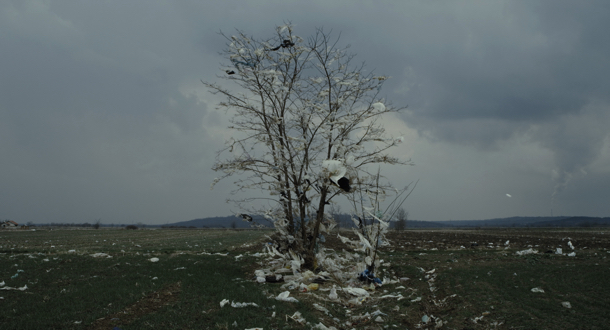 The serene waters of the River Danube pictured in Serbian filmmaker Ognjen Glanovic’s unremitingly grim DEPTH TWO hide a terrible secret: they have swallowed up the lives of 53 refugees fleeing across the Romanian border. But these are no ordinary refugees; they are victims of ethnic cleansing from the Kosovan town of Suva Reka who met their deaths in a pizzeria in 1999 at the hands of Serbian soldiers. And they were transported some distance from the Serbian capital Belgrade on the orders of Serbian authorities with the utmost secrecy being taken to ensure all evidence was hidden.

Made on a shoestring budget, and none the worse for it, Glanovic’s camera surveys this vast and desolate landscape to convey a faceless, bloodless, and ominous image of devastation while a monotone often droning narration bears witness to the killings that the Serbian government tried to conceal. Grimly poetic images of endless ghostly plastic bags trapped in tree branches are juxtaposed with a ghoulish stream of bullet-strewn clothing and personal effects that are the only surviving remnants of the dead apart from some improvised burial grounds. No faces just facts: a stark reminder of a tragic and brutal past.

After premiering his documentary at Berlinale Forum in 2016, Glanovic intends to film a dramatic reconstruction of the events, once the finance is in place. But somehow this faceless tribute feels all the more potent and effective forcing the viewer to imagine the horror. MT