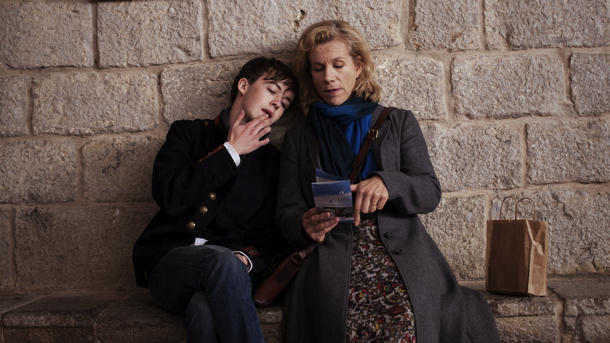 An English mother and son make a final journey to their French holiday home in this intense character-driven debut which will appeal to fans of Joanna Hogg with its shades of Archipelago. In DEPARTURE Andrew Steggall shows impressive maturity in understanding life from the middle-aged perspective of parents Beatrice (Juliet Stevenson) and Philip (Finbar Lynch) and their pubescent son Elliott (Alex Lawther) and teenage friend Clement  (Phenix Broussard). So often English debut dramas can be gorgeous to look but weak on narrative structure, but Streggall excels in a subtly nuanced rites of passage story sensitively rendered in a palette of soft autumn hues that echo a woman’s tristesse at the dying days of her marriage and the last hurrah of childhood innocence. DEPARTURE is full of nostalgia: its contempo themes of sexual longing, emotional loneliness and loss drifting alongside childhood memories and familial attachments as mother and son cling to a past that held high hopes for a rosy future, now shrouded in uncertainty.

As they arrive at the shuttered lakeside home, it’s clear that Bea (50s) and Elliott (15) bring with them a sense of bitterness and uncertainty. Elliott is detached and petulant: too immersed in the stirrings of his nascent gaydom to be aware of his mother’s depressed state. Bea is tearfully preoccupied and overwhelmed with feelings of anger over her sexually ambivalent and emotionally distant husband and the loss of her cherished home. It’s a toxic dynamic handled with gracefulness by Stevenson (in Truly Madly Deeply mode) and impressive newcomer Alex Lawther (who has the look of a character from a Rupert Brooke war poem, complete with the jacket).

When Elliott spys the slightly older Clement (Phenix Brossard – a younger Denis Lavant) diving into the local reservoir, he is immediately drawn to his vibrant swagger, and intoxicated by his bravery – the water is strictly out of bounds. But Clement is impervious to Elliott’s attempts to engage him in conversation as the boy becomes intrigued with his only local (bilingual) friend. What’s more, Clement seems more sympathetic to Bea’s feelings fuelling a spark of jealousy within Elliott as his obsession grows and a curious ménage à trois develops.

Cinematographer Brian Fawcett (who honed his craft on Venus and Control) cleverly uses his lenses to focus on the subtleties of facial expression and gesture, creating an evocative sense of place in the wooded countryside and local market towns in the ancient terroir of Languedoc-Roussillon. Clement is the breath of fresh air in this buttoned-up threesome, injecting irreverent humour and a sense of combativeness: when Elliott becomes too prissy he comments: “You’re a bit of a cliché – ‘the poet’-  brusquely bringing things down to earth. And when the English couple drift into over-sensitivity, Clement pricks the bubble with his bullish earthiness. But he has a more reflective side to his personality and his occasional outbursts mask a troubled sadness. After the pent up scenes of his father’s visit, Elliott’s emotional epiphany is marked by an inspired slow-motion underwater scene scored to Dvorak, bringing a spurt of fresh energy to proceedings in contrast to Bea’s sad plight. Stevenson delivers an affecting finale that will resonate with many women, offering rare insight into the female psyche that refuses to rant outwardly; tending to internalise emotional pain: in some ways her character is the most complex and underwritten. Lawther, who played the young Alan Turing in The Imitation Game provides another typically English portrait of burgeoning adolescent sexuality; finely-tuned, verging on anally narcissistic. Brossard is fabulously feisty and almost feral, and there is strong but underwritten support from Niamh Cusack (as a neighbour) while Lynch does his best as the typically silent and deadly avoidant male. DEPARTURE is absorbing and watchable, and although it could be argued that Steggall lingers a little too long on some of the scenes, he offers a well-crafted and inspired first feature making him a welcome British talent in the making . MT