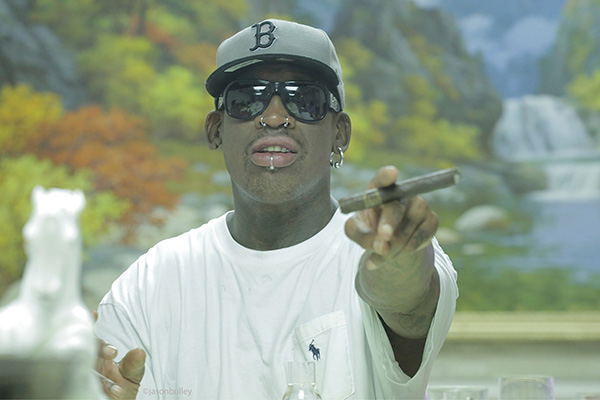 The North Korean supreme leader Kim Jong-un is not the only unusual character in Colin Offland’s debut feature documentary: Dennis Rodman’s Big Bang in PyongYang. The NBA veteran, Dennis Rodman, has some issues which come to the forefront as he forges a bizarre friendship with the dictator based on their mutual love of basketball. But diplomacy is not the word that springs to mind here when the Rodman decides to stage “the most controversial sporting event the world has never seen”.  Given to bouts of sobbing, shouting incoherently and drinking heavily, Rodman explains, in an emotional statement ”poolside” in his native Miami, how he aims to improve relations between the US and the estranged Asian Nation. So having received an invitation from Kim to improve on the performance given by the Harlem Globetrotters in 2013, Rodman jumps at the opportunity to visit with his own team buddies for a match with North Korea’s National team, to celebrate Kim’s birthday on January 8th 2014.

Rodman’s first surprise out of the bag is securing funding from the Irish bookmakers Paddy Power, who step in with finance to send the team to PyongYang.  But one wonders, given Rodman’s incendiary personality, if he really is the man to pull off a diplomatic engagement with such a volatile political regime, let along the dictator himself. Well fire certainly meets fire and that’s all part of the fun of this extraordinary story with its unexpected twists and turns. Most of the excitement lies in the contrast between the hulking figure of Rodman with his facial piercings and gargantuan hands swinging from muscly arms and the diminutive Kim who is briefly glimpsed smiling gleefully, next to his wife, during the final match ceremony on Rodman’s return visit.

The other reason to see this curiously absurd documentary is to get a glimpse of what North Korea actually looks like. Shot on the wide lens, what emerges here are vast open boulevards flanked by palatial buildings set in panoramic snowy scenery under electric blue skies. PyongYang itself makes Las Vegas look like a toy town; and those who’ve visited Vegas will appreciate the extraordinary distances from one hotel to another.

Clearly, the fact that Kim has recently had his uncle put to death and North Korea’s Human Rights record doesn’t square well with US diplomacy, sparking major controversy with the folks back home in America. But pouting like a petulant child, Rodman, now in his early fifties, insists naively “I’m not trying to be a politician. I’m not trying to be a world leader – It’s all about sports.”

In this fast-moving and well-edited film, Offland obtains remarkable footage of the events and, most hilarious of all, the celebration dinner in the presence of Kim, where Rodman finally loses it, despite the careful diplomatic groundwork prepared by his highly professional NBA colleagues, one of whom dissolves in tears in the aftermath. As politely smiling North Korean waitresses and diplomats look on wincingly, Dennis rants and raves like an enormous gorilla in designer sportswear. Talk about upping the ante: It’s unlikely Kim Jong-un expected such a showcase showdown in his own backyard. MT