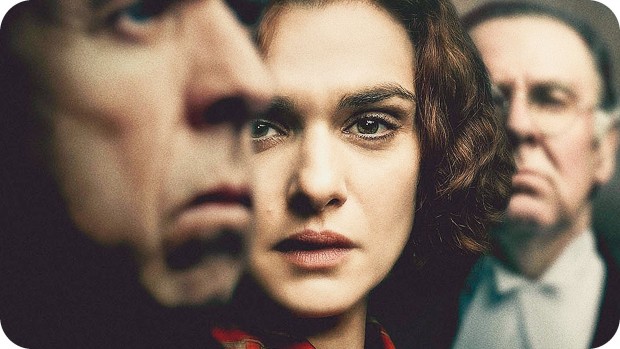 DENIAL is a court procedural that examines the case of Holocaust denier David Irving, who took USA historian Deborah Lipstadt and her British publishers Penguin to court for defamation in 2000. Directed by Mick Jackson (The Bodyguard) and written by David Hare, it tries to please a mainstream audience, without losing substance – a exacting undertaking which, for the most part, results in a lacklustre piece of entertainment.

Lipstadt (Weisz) had written Denying the Holocaust in 1993. Three years later, the historian and Holocaust Denier David Irving (Spall) sued Penguin for defamation. The libel case was heard in 2000 by Mr. Justice Gray, after Irving and Penguin had agreed not to go for a jury trial. Lipstadt was surprised that in English law the defendant has to present proof, and not the plaintiff – as in US law. Penguin and Lipstadt hired Richard Rampton QC (Wilkinson) and Anthony Julius (Scott) to lead their legal team, whilst Irving represented himself in court, having aquired much experience in this role.

Before the trial, Lipstadt and the team went to Auschwitz to see evidence; during the visit, Rampton is very detached and Lipstadt accuses him of being blasé in the face of such horror, due to his aimless meandering around the Camp. But during the trial, Rampton can convince the judge that Irvine’s assertion that the gas chambers were not used for killing, but as bunkers for the SS guards, was wrong, since the living quarters of the guards were three miles away. Lipstadt very much wants some concentration camps survivors to testify against Irving – meeting one of them, Vera Reich (Walter) during the trial. But Julius argues, that Irving would just humiliate the witnesses, as he has done in former trials. When Lipstadt visits Jewish organisations in London for financial help, she is given the cold shoulder: the Jewish leaders would rather have no trial and pay Irving off. In April 2000 Judge Gray delivers his verdict – 333 pages – that clears Lipstadt. Irving has to pay the costs of the trial and is declared bankrupt in 2002.

Based on Lipstadt’s book My Day in Court with a Holocaust Denier, it is hard to argue with the content, but the choice of DoP Haris Zambarloukos (responsible for productions like Thor) shows the intent of the filmmakers. The Auschwitz sequence is very much Hollywood at its worst. Perhaps it is best to close on David Irving in his own words, speaking with his baby daughter in a pram “When half-bred children are wheeled past: I am a Baby Aryan/Not Jewish or sectarian/I have no plans to marry an/Ape or Rastafarian.” AS