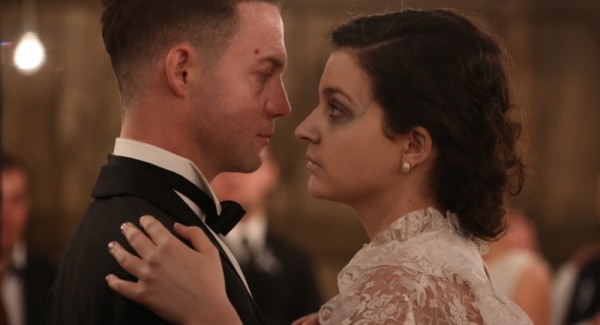 Director Marcin Wrona’s tragic suicide haunts this atmospheric tale of possession that opens with a suitably forboding original score from vintage Polish composer Krzysztof Penderecki as a ghostly dawn comes to a bucolic village south of Warsaw. It seems a fitting tribute that the film went on to win Best Horror Feature at Austin’s Fantastic Fest

Despite this unsettling start, the mood soon brightens with the arrival of Piotr who has come to marry his girlfriend Zaneta whose rambling family property is the setting for the celebrations and their future home. Clearly the two are madly in love but preparations take a sinister turn when Piotr discovers a some human remains while digging foundations for a swimming pool in the overgrown gardens. Piotr soon forgets about his ghoulish discovery as friends arrive and the wedding gets off to a boyant start; but clearly something is wrong. The tone lurches from heightened melodrama to seething dread as Piotr undergoes some kind of physical transformation involving fits and nosebleeds. Itay Tiran gives an extrordinary physical performance as the bridegroom; writhing, gesticulating and quivering like a man possessed – and clearly he is. But Piotr’s break-dancing histrionics feels like a mere side-show to the high guests’ already hysterical partying enhanced by heavy vodka drinking (a very Polish wedding), dancing and singing to the gypsy-style band. He is only taken seriously when he passes out after an ‘epileptic’ fit.  Naturally, Zaneta’s father (Andrzej Grabowski) has his worst fears confirmed – he was always suspicious of his daughter marrying a foreigner – ordering the wedding to continue, not wanting to upset or compromise Zaneta’s day. It soon emerges she is not the only bride at the wedding.

DEMON is an effecting mood piece; a great example of how music, lighting and subtle camerawork can be used effectively in the horror genre. Wrona’s script has a solid premise: that spirits from past lives can come back to haunt and meddle with the status quo. The feeling of tension and unease is dramatically heightened by Penderecki’s fantastic score which together with some breathtaking visuals from cinematographer Pawel Fils, convey a surreal, otherworldly quality to the narrative until eventually lines blur between reality and the supernatural to create a compelling fantasy ghost story rooted in the present. MT