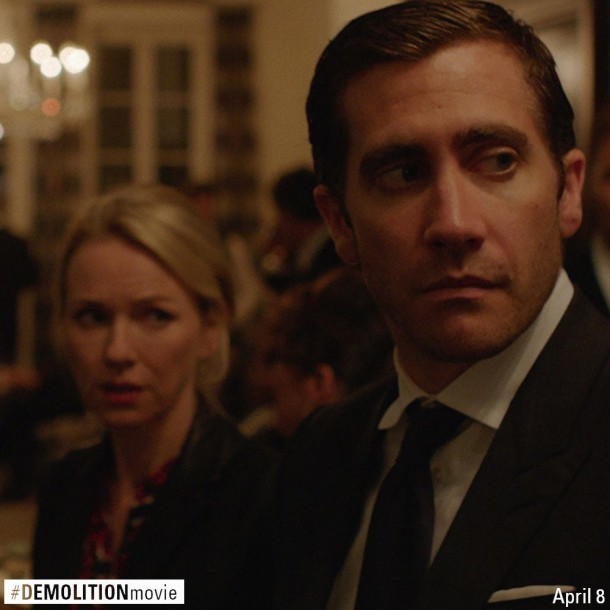 Québecois director Jean-Marc Vallée has a lively take on deconstructing bereavement in this quirky family saga sewn together by an inspired central performance from Jake Gyllenhaal, as a Wall Street banker and lateral thinker who loses his wife in a car accident that changes his life and adds intensity and insight to the harrowing and often surprising experience of human mourning.

While those around him are falling part, Davis (Gyllenhaal) fronts up well to this personal tragedy until cracks gradually appear in the facade of his outwardly shiny former existence – a fabulous house, wealth and a happy marriage to Julia (Heather Lind)- to reveal that his stoicism actually conceals a secret relief. DEMOLITION opens as a potentially depressing tale of loss that slowly morphs into a darkly humorous and enjoyable journey that transports him from death to destruction, then redemption and eventually emotional freedom. Despite a rather meandering middle section, there is tremendous energy and spirit here that carries the film through to its affecting denouement.

DEMOLITION also features gutsy performances from Chris Cooper, a slightly underwritten Naomi Watts and feisty newcomer Judah Lewis. Jean Marc Vallée always brings some something fresh and frisky spirituality to his filmmaking, as we saw in Cafe de Flore, C.R.A.Z.Y and Dallas Buyers Club. As such, Vallée has an appealing knack of connecting with his audiences through characters whose trials and tribulations bring them to a better place of greater awareness, in stories that inspire and often resonate with his audiences.

The theme of DEMOLITION is a case in point. Scripter Bryan Sipe tackles the thorny issues of disbelief, anger, sorrow and finally acceptance that accompany bereavement with some inventive touches: Davis’ grief is processed ‘out of the box’ and in unexpected and often inappropriate displacement activities; when his boss and father-in-law (Chris Cooper) suggests that Davis take his life apart in order to rebuild it without Julia he responds by dismantling his office computer and destroying his furniture. Instead of tears and tantrums with his friends and family, he destroys furniture and reaches out to complete strangers – an episode with a hospital vending machine ten minutes after his wife’s death leads to a lengthy correspondence with Karen, a customer service adviser (Watts) who ends up becoming part of his life and very much involved in his emotional healing.

DEMOLITION follows a linear narrative but regular DoP Yves Belanger cleverly uses jumpcuts and rapid flashbacks to fill in a backstory that initially leads us to believe that Davis is some kind of sociopath or, at least, suffering from Asperger’s syndrome; clearly he avoids ruminating on his inner demons with a series of personal techniques that keep him in a safe place emotionally – which his family interprets as a lack of feeling for Julia. But the finale seems to bring him to his senses – or even better, and plausibly – a place where his brain is healed so that he is able to feel and react ‘appropriately’ in a finale that is both moving and uplifting. Another tragedy that Davis discovers in the final scenes also brings him emotional peace through a relationship he develops with Karen’s 12-year-old son, Chris (Lewis) – it’s a meeting of minds that cuts both ways in bringing both their characters finally to safety. MT