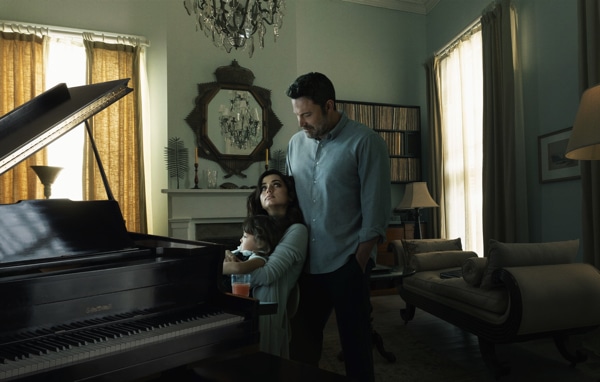 Ben Affleck is still darkly drole but somehow dissipated as the lowkey psychopath Vic. But in this screen version he no longer has a physical aversion to his aimless wife Melinda – on the contrary – the two enjoy passionate encounters and express undying love, yet we still root for Vic rather than his wife. And their little daughter Trixie (Jenkins) almost steals the show.

Vic and Melinda enjoy a close circle of friends in the upstate town of Little Wesley where snail-fancier Vic has made a fortune, and allows his bored wife to play the field to avoid the financial meltdown of divorce.

At first Vic tolerates the arrangement, it keeps Melinda entertained and out of his way. Vic has already dined out on the story of one of her flings, Malcolm McRae, who has mysteriously disappeared. But he takes exception when his flirty wife brings another man to their plush mansion, and masterfully shows him the door.

But one of their coterie, local writer Lionel Washington (Letts), has taken a dislike to Vic, probably jealous of his cushy arrangement, or even professional success. And he drills down on Vic determined to uncover the truth in a series of skanky strung together episodes that conflate the original story into a meaningless mess. MT