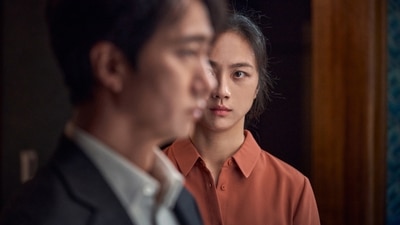 Park Chan-wook returns to Cannes after nearly six years and his latest, a dazzling Neo-noir love story spiked with dark humour and enveloped in a crime thriller, has won him Best Director. Decision to Leave is certainly a slick and seductive character drama although the sinuous serpentine plot may cause some frustration in the second half, and at well over two hours it rather overstays its welcome considering Claude Chabrol was making these kind of thrillers – admittedly on a much smaller budget – in a tightly-wound ninety minutes, always leaving you wanting more.

Decision to Leave revolves around an insomniac detective (Park Hae-li) investigating the death of a climber who fell from a shard-like mountain of the South Korean coastal location offering vertiginous contrast to the shadowplay of the more sombre domestic scenes, and adding to the thriller’s sultry allure. Seo-rae (Tang Wei), his Chinese widow, is not overly devastated by the loss of her husband and her blasé attitude leaves the pragmatic and happily married detective intrigued as he is slowly entranced by the widow’s enigmatic personality and beguiling beauty, prolonging the course of the murder investigation in a texturally rich narrative that touches on the enduring power of sex in longterm relationships, and the role of nutrition in healing the body.

The investigation grows more complex Detective Hae woon’s behaviour raises suspicions not only with his wife but also his colleague who questions him about his professional commitment to crime-solving. Meanwhile Seo-rae picks up on his interest in her which goes beyond the call of duty, particularly when he invites her to a lush sushi dinner and also prepares her favourite Chinese food in the privacy of her own kitchen.

Hae-joon and his wife eventually make the decision to move to another part of town to get some distance from a situation that grows more opaque when sinister details about the Chinese woman’s past emerge from police immigration records.

Decision to Leave is striking to look at, and the romantic interplay between detective and suspect offers its strongest moments, Park using his signature subtle wit to explore the sensuous dynamic between the two: the cool and procedural cop who falls victim to love and the geisha girl with a mysterious past. The second half becomes more erratic and loses its grip. It feels like the director finally gave up on his carefully constructed story that implodes in an enigmatic denouement and a captivating last scene on a deserted beach.

A striking and soulful thriller that succeeds largely due to the potent interplay between Tang-Wei and Park Hai Li whose chemistry smoulders in the same way as Barbara Stanwyck and Fred McMurray in Double Indemnity (1944). But will this South Korean affair still be memorable in another eighty years? MT