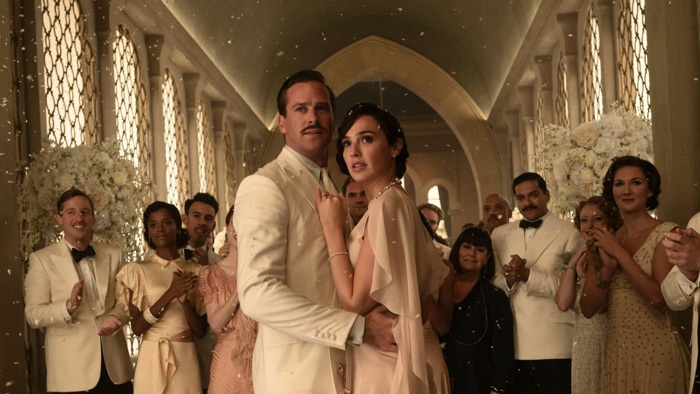 Kenneth Branagh’s DEATH ON THE NILE has really been through the mill. Based on the Agatha Christie novel of 1937 and adapted by Michael Green, it originally planned to be premiered in 2019, delays on the shoot led to the first postponement, followed by Disney buying up Fox and the feature, followed by the pandemic – and to make things really worse, accusations of rape and other crimes against Arnie Hammer, one of the leading stars. A re-shoot with a Hammer replacement was seen as too costly, and so here we are.

The first surprise is the black-and white prologue, featuring Poirot (a digitally rejuvenated Branagh) in the trenches in WWI, saving his compatriots, but being wounded in the process. More heartbreak is on the way, this time emotionally, leading us to the main course of love and lust, starting in 1937 in a London Jazz club with the impressive blues singer Salome Otterbourne (Okonedo). The latter will join Poirot on the pleasure boat ‘Karnak’, cruising the Nile, where just-married couple Linnet Ridgeway-Doyle (Gadot) and Simon Doyle (Hammer) are celebrating their recent wedding. But the couple are also engaging the help of the Belgian sleuth to fight off threats; mainly coming from the direction of Jacqueline de Bellefort (Mackay), who until recently was Simon’s lover, before super rich Linnet snatched hunky but impoverished Simon from Jacqueline’s clutches.

The action eventually kicks off after an hour: a falling pillar at the Abu Simbel temple just missing the Doyles. We have been pleasantly entertained by painter Euphemia (Benning), mother of Poirot’s best friend Bouc (Bateman), mysterious Dr. Bessner (Brand), Linnet’s thieving accountant (Fazal) and odd couple Mrs. Bowers (French) and Marie van Schuyler (Saunders). But before the first deadly shot is fired, and the victim identified, we are left in limbo. The final reveal makes up for some of the slack, but this Christie adaptation is outclassed by Branagh’s 2017 much less expensive Murder on the Orient Express, let alone John Guillermine’s Death on the Nile version of 1978, with the great Peter Ustinov as the Belgian sleuth.

Strangely enough, Greek DoP Haris Zambarloukas has not only shot Branagh’s MURDER, but also the director’s recent black & white beauty Belfast, costing perhaps ten percent of his latest Agatha Christie adventure budget. Shot in 65 mm (non-anamorphic), DEATH glitters, but it has no atmosphere, which is hardly surprising: only the second unit was dispatched to Egypt, while the remainder was shot against the ‘green wall’ and in a big tank in the studio. CGI can give you sparks, but it feels as hollow as the whole undertaking.

Branagh sadly fails Agatha Christie’s sparkling who-done-it which ends in melancholy mood at the same London Jazz club, Poirot at his maudlin best in the epilogue. AS

IN CINEMAS NATIONWIDE AND ACROSS EUROPE  FEBRUARY 2022