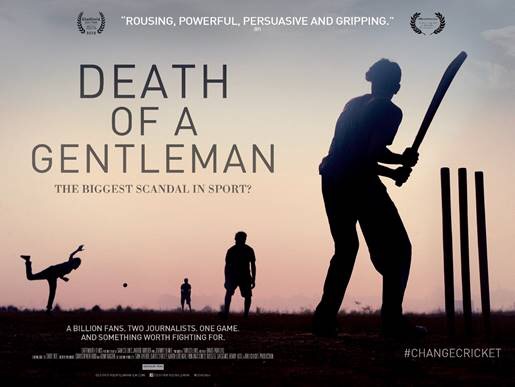 Searching for answers as to why the “gentleman’s” game of cricket – in particular its five-day format – is gradually dying out, two cricket enthusiasts stumble into a world of corruption in the International Cricket Council (ICC), making the FIFA scandal child’s-play in comparison.

The starting point of DEATH OF A GENTLEMAN is rather naïve: the reason for the demise of the five-day tests is mainly a changing generation of fans, whose attention span is limited. On top of it, the ethics of test cricket are buried in colonialism and imperialism, where gentlemen had their place (and leisure time), not caring too much about winning – after all, their status alone guaranteed that they were society’s winners. Today’s One Day events, called 20/20, have supporters whose behaviour is closer to that of the Premier League (at least in India) than the refined atmosphere at Lords. One may hanker after the feelings of the past, when a test match consumed not only the spectators, but as shown in certain Hitchcock films, gentlemen far away in foreigncountries, but the leisured classes of today have a wider choice than their Edwardian forefathers. This is still no reason for the ICC to limit the number of countries who are allowed to play test matches to ten, not even ten per cent of the 105 member countries. And the next edition of the Cricket World Cup will be played by ten, instead of fourteen teams. Cricket must be the only sport which cuts the participation of its main competition.

Much darker is the financial picture of the ICC. Since 2014 three nations, India, England and Australia have taken control of the money: over 52% of the revenues of the sport (the second highest spectator sport in the world), are shared by those three nations, the amount for the growth of the game has been cut from 25% per cent of the budget to a mere nine. Giles Clark, chairman, now president of the English Cricket board, can see nothing wrong with this development. After all, the former investment banker can be proud, having looked so successfully after the interests of his organisation. But the real villain of the peace is N Srinivasin, an Indian multi-millionaire who made his money in cement. Later, he invested in the Indian Cricket team CSK (Chennal Super Kings), part of the lucrative Indian Cricket League, where the best players from all over the world are hired to perform in One day cricket matches, in front of huge crowd and televised on lucrative pay-TV. N Srinivasin’s son-in-law, G Meiyappan, is the chairman of the CSK team, owned by his father-in-law. The Indian’s court wanted Srinivasin to resign from the position of chairman of the Indian Cricket Board, since he had a conflict of interest, being the owner of the most successful team. After his son-in-law was caught betting on his team’s result, and giving inside information to third parties, his father in-law finally resigned. But his influence is still overwhelming, his successor nothing more than a straw-man. N Srinivasin is also the chairman of the ICC, being responsible for the “financial reconstruction” of the game, and behind the upheaval of changes, which led to the election of a new ICC president, Zaheer Abbas, who is a supporter of N Srinivasin.

From a rather weak start, this well-crafted documentary develops a strong argument for change in the global running of this sport. As Lord Woolf, former Lord Chief Justice, wrote “The ICC reacts as though it is primarily a Members club, its interest in enhancing the global development of the game is secondary”. A must-see for fans of the game. AS

DEATH OF A GENTLEMAN is in cinemas 7th August http://deathofagentlemanfilm.com/