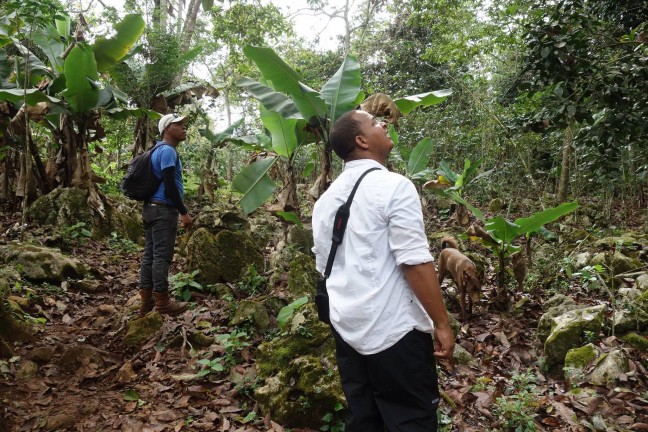 Haiti and the Dominican Republic (DR) share the Caribbean island of Hispaniola: they also share a long colonial past and brutal dictatorships during the 50s and 60s, when “Papa Doc” Duvalier in Haiti and Rafael Trujillo in the DR reigned supreme. But here all similarities end: whilst Haiti is one of the poorest nations on this planet, the DR on the other hand is one of richest countries in Central America.

Juan Mejia Botero’s ravishing documentary examines the main reason for the divergence: the near total deforestation in Haiti, where just 2% of the rain forest remains, whilst the DR thrives economically thanks to their preservation of its woods. Haiti’s population in the border region has taken to transgress into the forests of their neighbours, to cut trees down and produce charcoal, which they transport back into Haiti. The DR employs rangers who try and catch the Haitians, often beating them up and destroying the charcoal produced. In 2012, one of these rangers, Elisio Eloy Vargas, also known as Melaneo, was killed by the Haitian intruder Pablo Tipal. Vargas’ widow Calina suffers most from his death: she is from Haiti, and does not have the citizenship of the DR. Melaneo’s family, his mother and brother Chichi ostracise her, and the six children, three of whom had been fathered by Melaneo.

As the environmentalist Dr. Yolanda Leon drives through the boarder section, she discovers an increasingly presence of DR citizens breaking the law by cutting down trees and producing charcoal to transport via HGVs into Haiti. Big profits (dwarfing the amount of the illegal Haitians charcoal producers), are made by the HGV owners and bribes are made to the upper echelon of the DR administration. At the same time, there is a growing anti-Haitian feeling in the DR. Haitians are called ‘lazy’, and many are expelled. Even Calina is lucky to gain at least a provisional residence permit. Two years after the Melaneo murder, the son and cousin of Pablo Tipal are found dead: their throats are cut in the same way as Melaneo’s. As one citizen of the DR remarks: “To live at the boarder, you have to have a hard heart”.

Sumptuously photographed by DoP Juan Carlos Castaneda, this documentary illuminates many problems faced all over the world: the inequality of bordering countries, class diversions, corruption, legal and illegal emigration, ecological catastrophes and a growing hatred of all foreigners. This micro cosmos is superbly analysed by the directors – the personal and the political are always intertwined. An impressively, but sad study of human nature. AS

ON RELEASE AT BERTHA DOCHOUSE FROM 14 APRIL 2017