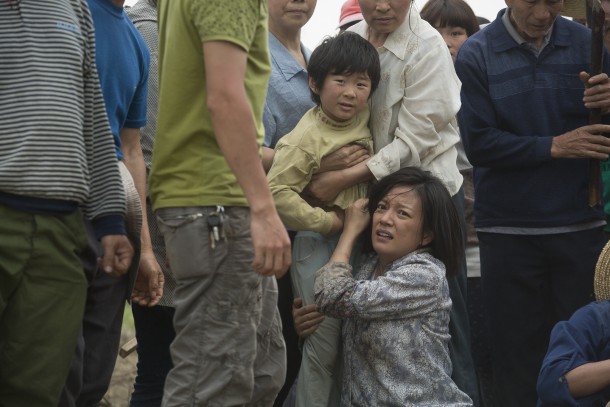 China’s social woes have been evoked by many films of late. This years Berlinale winner Black Coal, Thin Ice was a recent example of how the hurried introduction of capitalism is costing lives, loosening family ties and setting ordinary citizens against each other in the ruthless pursuit of material gain. Peter Ho Sun’s DEAREST deals with a particular macabre excess of Chinas’ neo-capitalism: organised child abduction.

Ho-Sun (Comrades, Almost a Love Story) takes his time introducing the main protagonists in this subtle and delicately told story of three harrowing abduction experiences: Tian (Bo) runs a small shop cum internet-café in Shenzen, he is looking after his little son Pengpeng, having gained custody, since his divorced wife Lu (Dei) was deemed an unsuitable mother by the courts. But it is Tian who is responsible for his son running away, chasing after his mother’s car after she dropped him off after her visiting day. Tian and Lu reunite, trying to find the boy. They discover that the kidnapping of children is a lucrative business in China, run by many organised groups. A huge number of bereft parents have founded support groups where they meet to console each other and travel all over the country when an abduction group is caught by the police, showing the criminals pictures of their children, asking (mostly in vain) if they have seen them. The leader of the support group, Tian and Lu join is helpful but his wife is near breaking point, looking for their son for over six years. Finally the couple ask for a death certificate for their son (under China’s “One Child per Family”  they need this to have another child). Eventually they track down their son Pengpen 13 hours by train away from Shenzen. His “mother” Li ((Wei), literally fights them as they scramble away with the child. It turns out, that Li’s husband has not only abducted Pengpeng, but also a little girl, brought up as Pengpeng’s sister but their struggle is far from over.

The most interesting part of DEAREST is the second of the well-crafted narratives with an unexpected twist in the tale. Shot on the widescreen, bleached-out visuals show squalor everywhere with an atmosphere of pervading desperation as civilisation breaks down into an amoral dystopia: Tian looses his shop whilst still looking for his son because the owner of the building has increased the rent. Li has to sleep with a stranger and work for a lawyer, trying to get her ‘daughter’ back. Lu’s new husband leaves her after she has found her son again, because he does not want to support Pengpeng. The organised child abducting groups are only the tip of the iceberg: this is a society self-destructing in the greedy pursuit of even the smallest profit. Zhao Wei’s Li is particularly impressive in this human, passionate but never sentimental portrait of an emotional wilderness, ruled by inhuman greed and soulless bureaucracy. AS