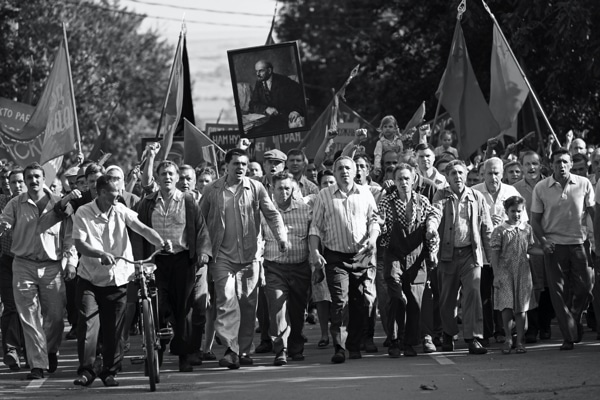 Veteran Russian director Andrei Konchalovsky uncovers a little known episode of the Nikita Krushchev era – the Novercherkassk Massacre  of June 1962 – in this elegant and restrained black and white feature filmed on academy ratio.

A follow-up to his last Venice offering – Sin – an imagined drama about Michelangelo – this is a more down to earth film but its refined gracefulness pictures the seriousness of the incident with a lightness of touch and even a dash of sardonic humour.

Dear Comrades! plays out during three days and is viewed through the eyes of a working woman played often vehemently by the director’s wife and regular collaborator Julia Vysotskaya. Lyuda is divorced and living with her daughter and father in the Southern city where she is a committed Communist Party official who yearns for the days of Stalin, despite its abuses which would lead to millions of Russians losing their lives. We instantly connect with her from the opening scene where she is in a rush to leave her married lover’s bed, keen to get in the supermarket queue before the shelves are emptied – due to the political regime rather than Covid19 shortages.

A strike is later announced at a local factory where Lyuda’s wilful teenage daughter Sveta (Julia Burova) is a worker and desperate to join her co-workers as they mass for the protest. Lyuda is watching the crowd swell from the balcony of her spacious offices but when the workers surge forward and break into the building she and her colleagues are advised to leave through the basement. Soon thousands are joining in the protest and the following days sees a KGB sniper shoots indiscriminately into the crowd and many civilians are killed and injured as they scatter for cover. .

The balanced script uncovers some fascinating contradictions about the Soviet era: Konchalovsky and his co-writer Elena Kiseleva are keen to point out that  the army are odds with the KGB and the forces end up taking the rap. The authorities crack down immediately ordering the main roads to be resurfaced with fresh tar macadam to hide the indelible bloodshed which has seeped into the cracks and dried in the searing sun. There is a rapid cover-up: locals are forced to sign non-disclosure agreements and sworn to secrecy upon pain of death. Meanwhile, Sveta has disappeared and Lyuda urges a KGB captain Viktor (Andrei Gusev) to help track her down.

In many ways Lyuda is a conflicted character not only for her political ideals but also for her personal ones: “Are you ashamed to share a bed with another woman’s husband?” complains her daughter when Lyuda complains about her daughter’s tarty habit of not wearing a bra.  Lyuda supports a crack-down on the protesters but when Sveta upholds her own constitutional right to protest, Lyuda tells her she should be disciplined. And the following vignette involving her father (Sergei Erlish) is a telling one as he dresses up in his military uniform and dusts down a religious icon of the Virgin Mary while reminiscing over past state abuses.

After a dignified irritation in the early scenes Lyuda start to let her emotions out of the bag in the final act, her anxiety bubbling to the surface but also her nihilistic acceptance of life under a regime which she has both aided and abetted, and is now suffering under. The final reveal topples over into a romantic sentimentalism bordering on melodrama that sits awkwardly with her stiff upper-lipped persona of the early part of the film, but this human drama is richly rewarding snapshot of life in 1960s Russia that doesn’t appear to have moved under Putin nearly sixty years later, according to Andre Konchalovsky. MT