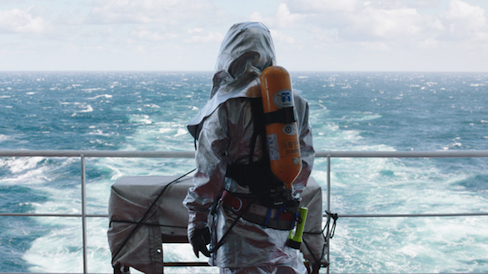 Axel Koenzen’s debut feature sets sail on the high seas where a Finnish Master steers his cargo vessel into the stormy waters of a crisis.

This realist drama has echoes of two recent marine-based films: Fidelio: Alice’s Journey and Mauro Herce’s documentary Dead Slow Ahead bringing us bang up to date with the harsh realities of life in the commercial shipping industry where time is the essence when meeting cargo delivery deadlines. Tommi Korpela plays the poker-faced captain in this paradoxically straightforward set of events that slowly draws us under its spell. Koentzen has also cast revered French arthouse actor Jeanne Balibar as a medical officer who joins the ship to investigate an accident at sea whose ripples will have increasingly far-reaching ettects in this voyage from Savannah (US) to Rotterdam.

We first meet the hooded Ahti Ikonen as he slinks into view and lingers suspiciously before boarding the vessel, in a scene that cast aspersions on the nature of his intentions. But he soon takes professional charge and we are swept into the daily rigours of life on board: the intricacies of machinery, stock-checking and general workings of this vast vessel. The predominantly Filipino crew are keen to get home and are ready to do overtime to finance their growing family responsibilities. Relaxed; they chat, play draughts and watch TV but it soon emerges that there has been an accident during lashing the large containers on board. This is a task primarily reserved, under union rules, for trained dockers rather than crew, but to make up time and get the vessel to Rotterdam for her deadline, it appears that union rules have been flouted with crew members undertaking the onerous job with and that one of them has suffered a blow to his head. All this emerges in a matter of fact way and low key way and James (Manuelito Acido), the man in question, is calm and lucid but expresses an angry desire to rest. He is later found dead. Judging by his disgruntlement with his wife – expressed in idle conversation in the locker room – it’s assumed this is a suicide rather than an accident but Koentzen leaves it open.

Whether Ikonen is being coldly professional or merely ambivalent is a question that plays on our minds throughout this taught but alienating feature. James’ death will have serious consequences for Ikonen and his second officer Martinescu (Ema Vetean), who initially bear up stoically but are gradually haunted by regret during a boozy evening of karaoke with the other crew members.

Cinematographer Alexander Gheorghiu’s sparkling images play around creatively with some inventive touches including occasional blackouts which serve to further alienate us and ramp up the tension in this slightly unnerving yet remarkable debut. MT