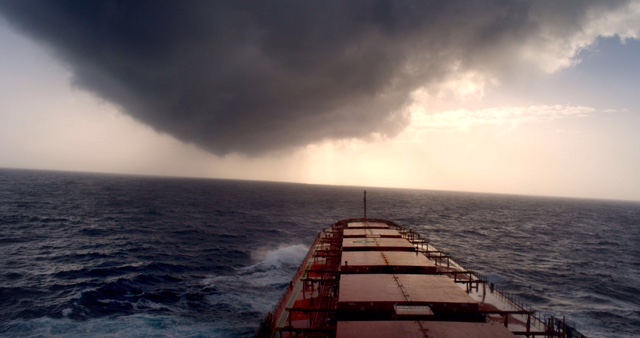 Dead Slow Ahead joins a growing subgenre of marine docudramas along with Lucien Castaing-Taylor’s Leviathan, Axel Koenzen’s sinister Deadweight and Félix Dufour-Laperrière’s Transatlantique that all take place on on commercial shipping vessels – in this case, the ‘Fair Lady,”. The fascination of these films is how the quotidian takes on a surreal and otherworldly aspect, thousands of miles from home. The diurnal drudgery of months adrift in a lonely seascape is transformed into a realm of alien eeriness when captured by Mauro Herce’s roving camera. Jose Manuel Berenguer’s sound crew creates a spacey soundscape aboard the ‘Fair Lady’.

Where Lucien Castaing Taylor’s Leviathan felt like a horror film for fish, Herce’s horror is a human experience,  homing in on unsettling skies and sinister ambient sounds of computer navigation conjuring up a menacing loneliness onboard the gigantic container ship that dwarfs its human crew on a journey into the unknown seas. Gone are lively ‘ahoys’ and spirited sailors songs of yesterday: today’s modern vessels echo, bleep and drone with the dissociative sounds of 21st century science.

As distant refineries illuminate the skylines with the toxic twinkle of their chemical haze, the vast decks of the vessel glimmer and glow under translucent skies. Below deck, the vacant corridors clank and jolt and the billowing bowels of the container compartments appear like chasms in a mammoth sea monster, swallowing up the inanimate human crew like ineffectual ants, their only humanity telegraphed by disembodied voices in a seaborne planet heading into the unknown. MT