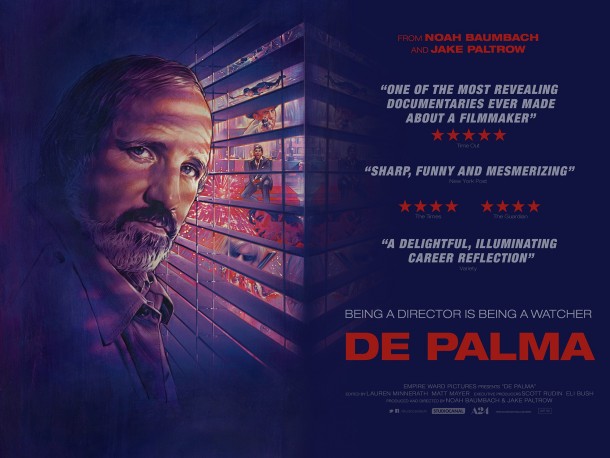 Directors Noah Baumbach and Jake Paltrow’s unusual but effective format for their documentary on Brian De Palma allows the director to appraise his own films. His often defensive approach in standing by the flagrant victimisation of his female characters make it obvious that the filmmakers raised these questions in the off. Not only does this approach spare the audience endless ‘Talking Heads’ crucially it allows De Palma to “hang himself” with his excuses and denials.

Brian De Palma (*1940) belongs with the directors of the era: Martin Scorsese; John Milius; George Lucas; Paul Schrader; Francis F. Coppola; Steven Spielberg and Ridley Scott to a Hollywood creed, which dominated artistically first as a “New Wave”, and then very quickly the high-profit commercial cinema of the Dream Factory. De Palma is – together with Milius – the great outsider of this group. Brian De Palma studied physics before falling in love with cinema, largely due to Alfred Hitchcock’s Vertigo. But among his first films were the anti-Vietnam Agit-prop works of Greetings (Silver Bear Berlin 1968 Film Festival) and Hi Mom (1970). Later he would revisit this topic with Casualties of War (1989). His stringent logic about the catastrophic outcomes of all the American wars in foreign countries, from Vietnam to Iraq, is laudable. But when it comes to his own violent movies such as Dress to Kill (1980) or Body Double (1984), with its near fetishistic violence against women, he stumbles through his denials: admitting, quite seriously, that the drill used by the killer in Body Double had to be big enough to go through the woman and the ceiling into the room underneath, so that the camera could catch the dripping blood.

Blood dominates his work, whatever the genre: Scarface (1983), The Untouchables (1987), Carlito’s Way (1993) completing his Gangster trilogy; Obsession and Carrie (both 1976), Blow Out (1981) and the aforementioned Body Double and Dress to Kill are proxies of a more personal bloodbath. Compared with all these frontal attacks on sensitivity, his mainstream productions like “The Bonfire of Vanities” (1990), Mission Impossible I (1996) and Mission to Mars (2000) seem to be just ordinary by comparison.

Many critics accuse De Palma of having no personal style – unlike Lucas or Spielberg – but this argument seems false, at least on an aesthetic level. De Palma often uses split screen and very acute angles, he has never forgotten his beginnings as an Hitchcock epigone with Sisters (1972), where he playfully imitated the master, using the camera as his way to show distortion as reality.

Baumbach and Paltrow’s approach is simple, but not simplistic: they let De Palma contradict himself sometimes, whilst commenting on his film extracts. But overall, DE PALMA is a lesson in film history, and quite an enjoyable one at that. It shows a Hollywood before the money men took over, when experiments were still part of growing up as a filmmaker. Some did, but Brian De Palma certainly did not, he just got older: Passion (2012) is just a tired version of Sisters, but it is as cold and detached as his earlier works. De Palma has been married three times, all his marriages (among them with actress Nancy Allen, star of three of his films) lasted a combined eight years. The last word should go to David Thompson who described the filmmaker as somebody “who controls everything, except his own cruelty and indifference.” AS

ON GENERAL RELEASE FROM 23 SEPTEMBER 2016