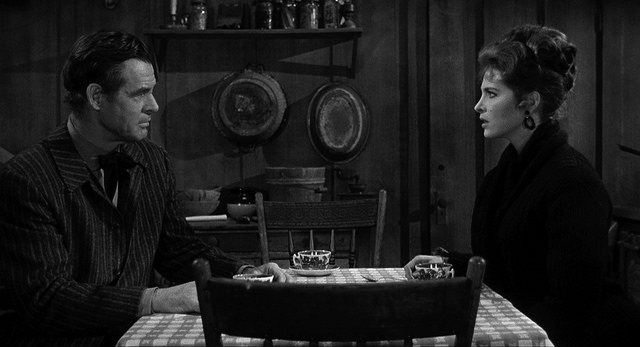 André de Toth (1913-2002) was one of the ‘B-Movie’ directors of Hollywood, admired by the French Nouvelle Vague: his austere films featured ambivalent heroes for whom even a happy-end could only be ambiguous. Widely known only for his 3-D feature House of Wax (1953) – a considerable achievement, since de Toth had lost an eye in a childhood accident – the Hollywood films of the Hungarian emigrant have very much in common with the work of Robert Siodmak, Max Ophuls and Fritz Lang.

Born into Hungarian nobility as Endre Antal Miksa de Toth in 1913, de Toth directed five (!) features as Endre Toth in Hungary in 1939, before he went to London to work for his compatriot Alexander Korda in London. In 1942 he went to the United States where he started his Hollywood career with Passport to Suez in 1943. A year later he married Veronica Lake, and had two children before their divorce in 1952. That same year De Toth directed his only A-Feature, the Gary Cooper vehicle Springfield Rifle.

His B-Pictures, mostly Western and film noirs, feature heroes suffering from violence, betrayal and an exterior space which makes their tasks even harder. These heroes are almost catatonic, they seem to glide in slow motion into their conflicts. In true Noir fashion (de Toth’s Western are as Noirish as his urbane films) the hero stands alone, his interactions with the environment forcing him to make choices. Spaces, like the snowy mountain in Day of the Outlaw, are complex and often treacherous, the hero (in this case Robert Ryan’s Starrett) being forced to unite with the environment against his enemies. But, like the audience, “the landscape acts as a mute witness to and stage for the entwined actions of the characters”. De Toth’s characters seem to question how long they have to suffer for the wrong choices they have made in the past. De Toth’s cinema has a blunt anti-romanticism, which borders on a deeply unsettling morbidity.

The cattle baron Blaise Starrett (Ryan) is set for a shoot-out with the farmer Hal Crane (Marshal), because the latter wants to fence in his land, this way stopping Starrett’s cattle from grazing. The situation is complicated by the fact that Crane’s wife Helen (Louise) was once Starrett’s lover, and offers herself to Starrett, if he (being the much better shot) would refrain from the duel with her husband. Starrett declines the offer and the two men face each other when a gang of outlaws enters the tavern, led by the renegade Union officer Jack Bruhn (Ives). Whilst Bruhn, who is injured (the local vet removes the bullet from his chest), wants to save the women of the little hamlet from his brutal and sadistic troop, Starrett tries to guide the women away from the marauders, but is stopped and beaten up. It’s obvious that Bruhn will not live very long to keep his gang in check, and Starrett leads him and his men into the snowy wilderness, pretending that he knows a pass though the mountain.

De Toth recalls “the producers did not understand where I was heading – a sphere I had been exploring for some time: is it worse being the jailer, instead of the prisoner? Is it worse being incarcerated by the white snow in white silence, or by the blankness of black silence? Which of the human flock would fall apart first under the tightening band of their communal deep freeze?” De Toth also had to fight the producers to shoot the film in black and white: “It was a story of tension and fear, survival in a prison of snow. Had I shot it in colour, the green pine trees covered with snow, the soft glow of candles, the dancing tongues of flames in the fireplaces would have radiated warmth and safety, and the joy of peace on earth. A ‘Merry Christmas’ card from fairy-tale land”.

DOP Russell Harlan (To Kill a Mocking Bird, Rio Bravo), had already shot seven films for Howard Hawks and his images here are again striking; together with Robert Ryan’s towering performance, they inspire his film which culminates in a cat-and-mouse game in the snow, one of the cruellest moments of the film – only surpassed by a wild dance scene where the outlaws are ‘allowed’ by Bruhn to dance with the town’s women; manhandling them brutally in scenes that teeter on the brink of rape. The camera follows them in epicyclic circles, like a machinegun covering a war scene. DAY OF THE OUTLAW shows that male violence of all kinds is ready to erupt at any time, for whatever reason. Ryan’s Starrett, who was only a moment away from killing Crane, is well aware of his propensity for savagery when he is riding out with the outlaws into the snowy mountain. AS