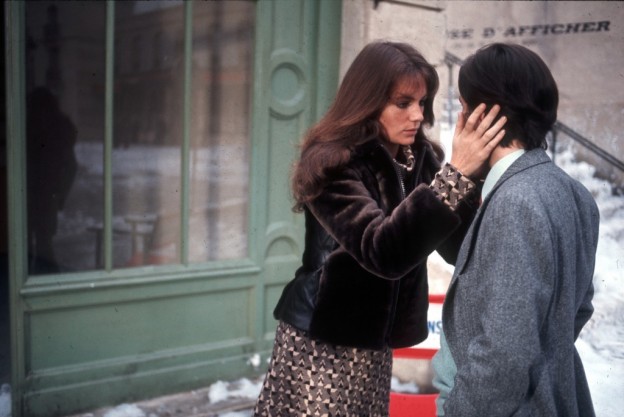 With DAY FOR NIGHT, his fourteenth feature film, Truffaut wanted to make a break from his earlier work: “I am a French filmmaker, and I have to make another thirty films”. Unfortunately, he would only direct another eight, due to his untimely death at the age of fifty-two in 1984.

DAY FOR NIGHT refers to a technical term in film making, where night scenes are shot at daytime, with dark lenses creating the illusion of darkness. The director Ferrand (played by Truffaut), shoots the film within a film in Nice. There (fictional) shoot proves to be problematic: the director clashes with the producer, the star Alphonse (Léaud) falls in love with the fragile leading lady Julie Baker (Bisset), who calls her husband/analyst to sort things out. Another leading man called Alexandre, (Aumont) dies. Fiction and reality continuously overlap: Harassed by Alphonse, Julie exclaims: “I want to live alone”, only to find the same sentence written by the director in her script for next day’s shooting. Wearing a hearing aid in reference to Luis Buñuel, Ferrand/Truffaut shows himself above crew and cast: he tries to be disinterested, being only in love with cinema itself, and wanting to be loved back by the audience as the only reward. DAY FOR NIGHT is a love letter to filmmaking, traditional and uncontroversial.

The film was used by Jean-Luc Godard and Truffaut to bring their personal relationship to a bitter end: Truffaut even calling his ex-collaborator a “shit”. After all, they had directed Une Histoire D’Eau (1958) together, and Truffaut gave Godard the script to direct “A Bout de Souffle”. Godard started the argument, calling Truffaut a liar, since Ferrand/Truffaut in DAY FOR NIGHT rises above all emotional complications. The real Truffaut liked to sleep with his leading ladies – in common with Godard. As usual, financing was an issue: but this was more about where the two directors were standing in filmmaking terms: Truffaut was going backwards, making exactly the same movies “of qualities and psychology” which he had panned as a film critic; whilst Godard was well on his way to ‘re-inventing’ cinema. When Ferrand/Truffaut comments after the death of Alexandre in DAY FOR NIGHT: “With him we lose a whole epoch of filmmaking. From now on, the studios will be dying, films will only be shot on the streets, without proper scripts”, he echoes Melville’s critic of Godard, whom he once defended against the older filmmaker. In an interview with Suzanne Schiffman, Truffaut’s collaborator for decades, she told me, that “if Truffaut would have lived, he would have only shot in studios, the only place he felt secure”. Interviewed by the German Film journalist Michel Ladiges in February 1974, Ladiges asks Truffaut about his relationship with Truffaut. There seem to be not so much hard feeling, just puzzlement: “I don’t know [about the directions taken by the directors of the Nouvelle Vague], but with Godard, you have to be very careful. He has finished a certain period in his work. Today, he is very much in favour of video, because he believes, this is the future of filmmaking. But he can change his opinion any time, and will return to filmmaking. One can be never sure with him”.

Which proved to be true: Godard would return to directing films in 1975 with Numéro Deux – but comparing this radical portrait of a family with Truffaut’s L’Histoire d’Adèle H., shot in the same year, one has the answer for the spat: it was not so much about jealousy and money, but a parting of the ways: Godard created his own universe, whilst Truffaut, a true romantic at heart, went on trying to please a mass audience. AS