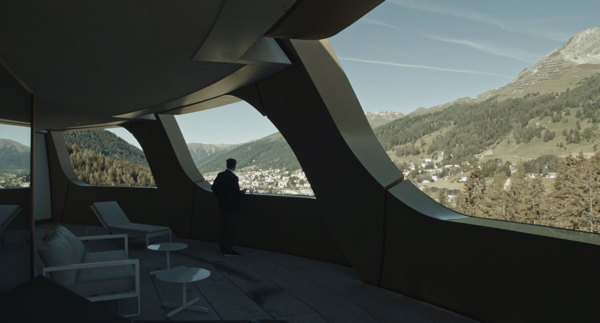 Austrian director Daniel Hoesl and co-director/writer Julia Niemann have visited Davos – but not only for the World Economic Forum (WEC), which is staged every year in the Swiss town, but mainly to understand what makes it the Swiss resort tick, outside the circus-like meeting.

First we learn something about Davos and culture: a museum’s guide shows a painting of the Swiss town by the artist Ernst Ludwig Kirchner, talking about the modernity of the place with its flat roofs, we also hear in a voice-over about another artist with Davos connections: the German writer Thomas Mann, who published in 1925 his novel Der Zauberberg, the same year Kirchner painted his picture. And the townsfolk of Davos were unhappy about the novel, on the ground of it depicting Davos as a world wide as a retreat for the sick.

Next we witness the still birth of a calf in a cow shed – we will meet the cattle farmer, Bettina more often later. We than witness a meeting of councillors, who deal with asylum seekers; one of them, Ali, is in danger of being deported and has been arrested by the police. Afterwards, first contact with the WEC is made in a meeting of the organisers, who listen to questions from the locals. The organisers are proud to announce that the WEC meeting will bring 60million Swiss Francs into the town’s coffers and 94 M SF into the Swiss economy. One participant points out that hardly any social progress has been made in the last thirty years, whilst their security budget has risen astronomically. But the speaker for the WEC is polite, and hopes “that you will discuss and pass the budget for the next six years.”

We meet Bettina and her husband again at the Davos Cattle Show, where the referee explains to the knowledgeable audience, why the winner has been chosen. Meanwhile, in the Davis tourist office, the editorial board discusses the next magazine: only two pages have not been filled, and one member makes a bad joke about “what if nobody dies?”

Outside in the snow, British and Swiss parliamentarians enjoy slalom races, the Swiss, not surprisingly, being the clear winners. In the kitchen of a major hotel, the waiters complain, that they have to drink with guests all night to keep them happy, whilst sitting on the floor, eating their meal. Bettina complains at a meeting with other cattle farmers, that the price they get for the milk is hardly worth the work involved.

Then the big day comes, and the guests arrive in the congress hall where a seminar, “A day in the life of a refugee” is one of many attractions. Outside, protesters take a dim view of the meeting’s slogan: “Davos is a place for dialogue”, and President Trump bears the brunt of their disgruntlement. They hold up placards with slogans such as: “Dictators get free aperitifs, while their people starve at home.”

In the hall, the organisers are being asked some serious questions: Why has the number of women participating in world economics dropped in the last year? The shops of the Arcade have been transformed into showcases for countries: Poland claims to be the “Can-do Nation”, there is a Ukrainian Fashion Show and a Thailand Night. When the WEC is over, these nation showcases go back to normal shops, food halls and fashion houses. Nothing has changed in the wake of the Summit, and we return to Bettina, who has to sell all her animals, and leaves in tears. She visits another public meeting, where the history of the town is celebrated, with music and a special sort of wrestling, which was depicted on another Kirchner painting in the Davos museum.

Davos is a film that grows more and more intriguing as it plays out: the small details make you curious, and Bettina’s fate adds dramatic tension, the visiting dignitaries paling into insignificance. DoP Andy Witmer is a successful fly on the wall, taking in the significant with the banal. Davos reveals the reality behind the facade, giving  voice to the people who live there every day. AS