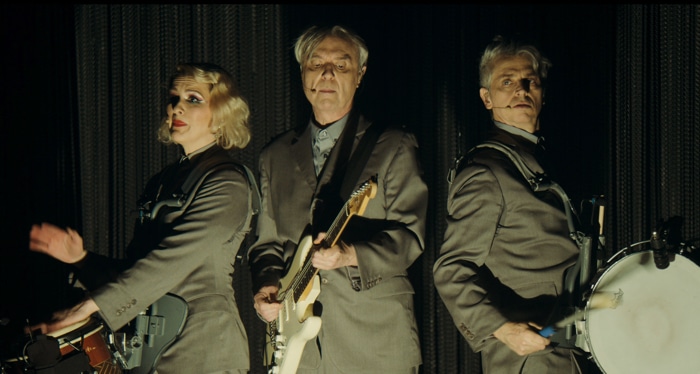 Artists crave new audiences. So Spike Lee has filmed David Byrne’s Broadway stage-version of his solo album American Utopia in a bid to attract a younger following. Will it work? Memorable tunes capture moments in our life, and this is true for all ages who will forge new memories from these golden classics. Byrne created a string of them with his famous Talking Heads band in the 1980s and this musical trip down memory lane will have appeal for all audiences. Playing out in a slick re-showcasing American Utopia looks fresh and funky while also appealing to a loyal fanbase. Agile as a silver fox Byrne sashays across the stage, an eminence gris on acid with his familiar gunmetal tailoring (and this time bare feet) recalling his Stop Making Sense concert movie directed by Jonathan Demme back in 1984 (now on BFI player).

Distant and slightly surreal the quixotic quirkiness is still there as he juts around in perfect symmetry with his musical acolytes: Glass, This Must Be the Place, Once in a Lifetime,  Concrete and Stone and many more number are there for your enjoyment in this trippy nostalgia-filled extravaganza. Even the Black Lives Matter box is ticked and dovetails neatly into the narrative with a version of Janelle Monáe’s Hell You Talmabout, Byrne exhorting the audience to recall those who  have lost their lives in police conflict. Byrne is a star. Stars are there to capture our imagination. His allure lies in his unreachability. If he suddenly started sharing his problems or consumer bleats you’d be sadly disappointed. Luckily he remains distant. As he leaves the stage the camera sees him warming to colleagues in his dressing room, and riding home on his bike. For a moment he’s human. MT