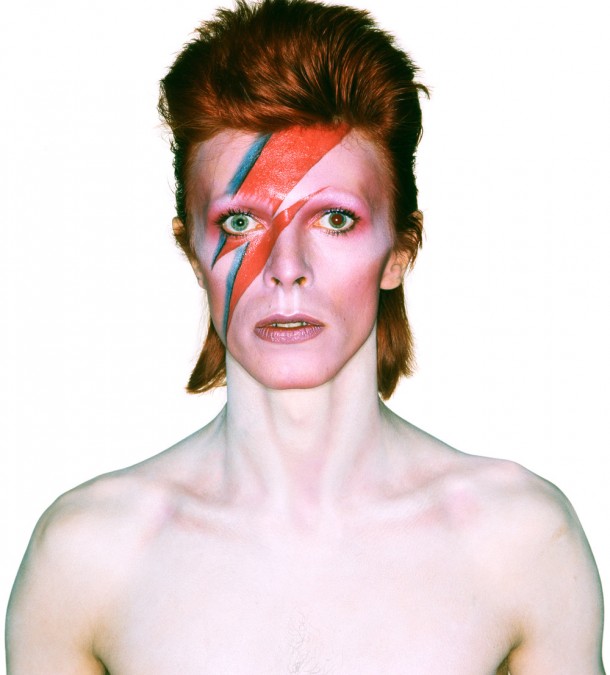 With its chipper introduction by the plummy V&A Museum tour guides, Victoria Broackes and  Geoffrey Marsh, DAVID BOWIE IS plays like a glossy travelogue piece you might expect to see on the Heathrow Express or a London Hotel lobby, vaunting the attractions of cultural London. For those who express a passing interest in this iconic music man it provides some interesting background ephemera, over continental breakfast or a cursory glass of red. But for devotees ravenous and ready to chow down on a meaty chunk of the charismatic singer’s 40 year’s of life and works it’s nothing more than an amuse-gueule. So when does the real documentary arrive?.

Co-directors Hamish Hamilton and Katy Mullan lead us in by introducing chapters of this portmanteau affair with its arcane titles such as “David Bowie is blowing our minds”. This has the feel of a graduation show aimed at informing and updating elderly relatives from Utoxeter or sheltered out-of-towners from Stanmore who are more used to the Museum’s usual fare of pre-Raphaelite this and post-Impressionist that, and have come to see what all the fuss is about.

The camera feels rather awkward as it navigates the variety of different ‘installations’ but works better with the sequences shot in front of live audiences where the usual talking heads contribute their pennyworths on the subject of Bowie (pronounced Bowie as in showy – ‘after the Knife of the same name’). Jarvis Cocker says a few words and Kansai Yamamoto thrills at the memory of his designs being worn by “Ziggy Stardust”, especially being a woman’s designer. The film’s longueurs featuring only applause detract rather than add to the experience.

Apart from some photos and personal drawings, David Bowie’s evocative wardrobe is far the most exciting part of this filmed exhibition. Those legendary outfits are redolent of the seventies when Bowie’s burgeoning sexual ambiguity felt edgily provocative and thrilling for a generation brought up on the freshly-shampooed sentimentality of the Beatles or even the ‘cheeky’ Monkeys. This is an amusing outing for those wishing to tune-in and glide over the surface of the David Bowie machine and with any luck will whet the appetite for the making of real in-depth documentary. MT

DAVID BOWIE IS on general release from Monday 17th November 2014 in selected venues nationwide. The exhibition was on display at the Victoria and Albert Museum in 2013.