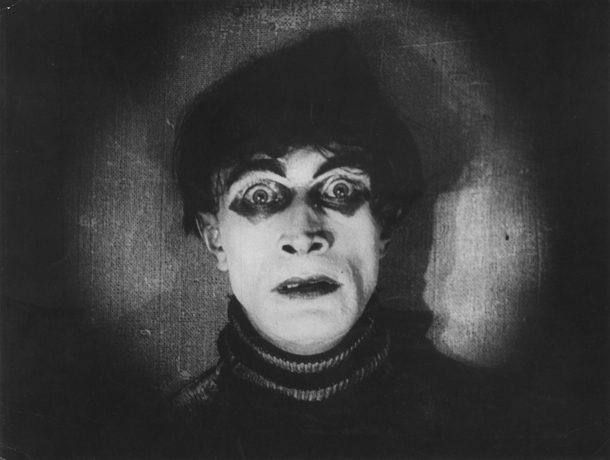 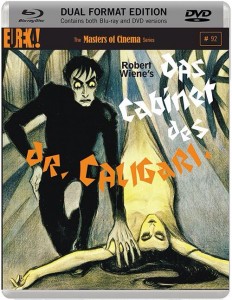 Few films have been the object of so much secondary literature as CALIGARI, but the production itself came together more or less by accident. To start with, Fritz Lang was supposed to be the director but he did not finish his production of Die Spinnen in time, and Wiene was chosen to direct, even though Lang was still involved, being the author of the sub-plot, which framed the main narrative. Carl Mayer Mayer and  Hans Jannowitz, the script writers, both believed that the new structure watered the message of the film down (as did Siegfried Kracauer, but more about that later). But most important, Wiene did replace the symbolist painter Alfred Kubin, who was supposed to design the film with Hermann Warm, Walter Röhrig und Walter Reimann, members of the Berlin expressionist group “Der Sturm”. The rest, as they say, is history.

In an asylum, the patient Francis (Feher) sees Jane (Dagover) walking past him, and he starts telling her story to another patient: On a fair ground in small a north German town, Dr. Caligari (Krauß) shows his medium Cesare (Veidt) to the paying audience. Cesare is supposed to know the future but after a civil servant, who has mistreated Caligari, is found murdered, Francis and his friend Alan suspect Cesare. When Alan inquires how long he would go on living, Cesare answers “till the next morning”. Alan too is murdered and Francis finds out that it is not Cesare who is sleeping in a box in Caligari’s tent, but a doll. Cesare now (unsuccessfully) kidnaps Jane, with whom Francis is in love. Caligari escapes, hiding in an asylum, where Francis finds out that he is really the Chief Warden. When Caligari is shown Cesare’s corpse, he looses his mind. After ending his story Francis meets Caligari, the real Chief Warden, and accuses him of being the mad fair ground proprietor. But Caligari explains calmly to a co-worker that, after hearing Francis story, he would be able to cure him.

The Expressionism of the design is supported by the actors, mainly Krauß and Veidt. The design, exclusively painted, is dominated by distorted perspectives and painted shadows, also synonymous with the jaggedness of the Expressionist movement, confusing the audience even more with their unrealistic angles and sinister atmosphere. Intricate convoluted levels negate the realistic conceptions of space. Inter and subtitles are part of this strange world: when the psychiatrist is driven by his madness to become Caligari, letters are dancing across the contorted roofs of the town forming, in the end, the sentencing “Du mußt Caligari warden” (You have to become Caligari”).

It is true that the sub-plot takes much away from effect of the main narrative. Instead of being a dangerous madman, masquerading as a Chief Warden, Caligari becomes a positive character, only wanting to help the disturbed Francis. In “From Caligari to Hitler”, Siegfried Kracauer, a film critic who emigrated to the United States after the suicide of his friend Walter Benjamin, researches film characters in popular German films between 1918 and 1933, and comes to the conclusion that Caligari was more or less a prototype Hitler, a mentally ill person, who incited others to murder for his own ends. The distorted reality of the film set was for Kracauer also a sign of the madness of the fascist system, which orchestrated great spectacles to trick the masses into following Hitler.

Having said all this, CALIGARI is even today, after nearly hundred years, a very frightening film. Whatever the interpretations, it may well be the first true horror film in the history of the seventh art. AS