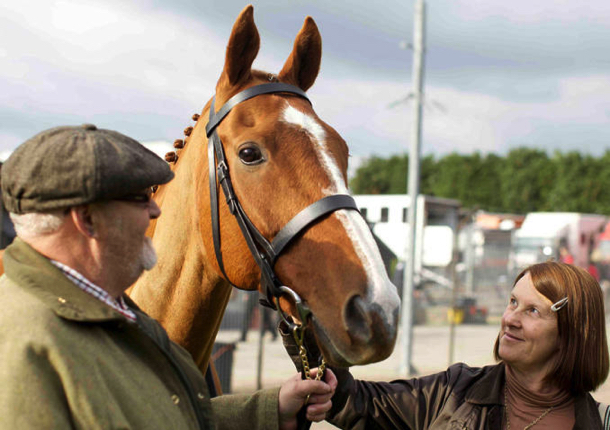 Director Louise Osmond is well-known for her topical documentaries that explore extraordinary events in history.  She made Deep Water about the disastrous 1968 round-the-world yacht race and more recently Richard III: The King in the Car Park that examined events surrounding the discovery of the last Plantagenet King of England. Her Sundance audience award winner, Dark Horse, is a ‘rags to riches’ documentary Feelgood film, showing how love for an animal brought excitement, focus and income to a forgotten mining community deep in the Welsh Valleys, thanks to one woman.

It was all down to Jan Vokes, a bartender  from Cefn Fforest. According to husband ‘Daisy’, if she put her mind to something she usually achieved it. Jan had lived an ‘insignificant’ life since childhood. Her hobby is breeding: after several children, she turned to dogs and budgies, very much following in the footsteps of her father, who was also keen on animals. In 200o, she got talking to local accountant and racing enthusiast, Howard Davies, and together they hatched a hair-brained scheme to breed a racehorse.

Naturally, money was key to the success of the plan and it was also in short supply in this former mining town. In order to achieve a positive outcome good breeding stock would be required and training fees of around £15,000 a year. Jan took on an extra shift at Asda and with her large circle of friends from the local pub, they clubbed together to raise finance in the form of shares for the proposed scheme to the tune of £10 a week..

Osmond’s tells the story through talking-head interviews with the villagers and trainers, illustrative photos from paintings and evocative images of the local countryside. A decision was taken to name the foal, born from a racing stallion, ‘Dream Alliance’, reflecting the hopes and aspirations of these close-knit Welsh neighbours. Dream Alliance grows up to be self-willed and competitive although not the fastest steed in the upmarket stable of where he underwent vigorous training. But the animal ignites a sense of genuine pride and positiveness that palpably generates a ‘feelgood’ factor all round. The owners embark on a busman’s holiday to each and every race track, cheering Dream Alliance to the finishing line. Like many animals lovers, Jan also claims that she has a secret bond with Dream, who gradually goes on to be the winner that they’d always hoped for, although disaster lies ahead on the surprising but entirely realistic path of fate.

Apart from the feel-good factor, what makes the film so joyful is the sheer love for this horse, that intoxicates villagers and viewers alike. Dark Horse delivers a message of hope: everyone can live their dream if they put their best horse forward and their mind to it. It is also story of female empowerment: of how Jan always felt she was living through the men in her family until the day that Dream Alliance came into her life. Dark Horse is a hands down winner that makes us care about a bunch of genuinely people who face up to life with humour and decency and a horse that triumphed against all odds. MT