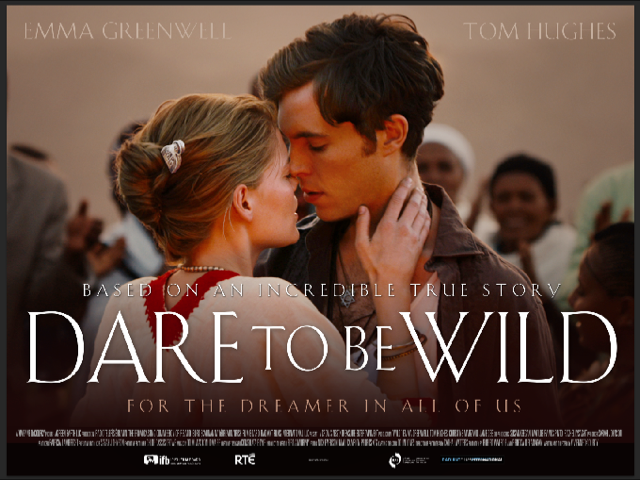 First time writer/director Vivienne De Courcy makes an ambitious attempt to connect the highly organised Chelsea Flower Show with the adjective “wild” – personified in this case by the real life Irish garden designer Mary Reynolds, who won a Gold Medal there in 2002. Somehow, the filmmaker brings these contradictions together, even though the strain sometimes shows.

Mary Reynolds (Greenwell) grows up in the Irish countryside as a wild child, falling in love with nature. A headstrong young woman, she then moves to Dublin to try her luck as a landscape designer. But her first employer, Charlotte “Shah” (Marzano) steals her design book, and sells the designs as her own – before firing Mary, after marrying a rich Englishman. Luckily for Mary, she also falls in love – with Christy Collard – the leader of a band called The Green Angels, who lives in Cork and has a highly competitive relationship with his father Mike (Somers) who has a New Age group. Mary needs the help of these men for her project at the Chelsea Flower show, where she wants to re-create a nature garden – not forgetting the £250 000, which are needed to enter the competition. But Christy, although very much in love with Mary, goes back to Ethiopia, where he leads a campaign for re-forestation, telling Mary that this project is much worthier than her Chelsea project and putting their love on the back burner.

De Courcy does her best to create a very lively drama, with Mary travelling the world, but never losing sight of her target: winning at Chelsea. Greenwell is vey apt at portraying the young woman as a mixture of stubborn, adventurous and naïve. She carries the film singlehandedly, and lets the audience forget the many contradictions and implausibilities of the storyline. Gorgeous to look at, Cathal Watters sumptuous visuals paint a glorious background, and particularly the African environment is shown impressively. The Chelsea settings are a also brilliantly re-constructed, complete with an actor impersonating Prince Charles having a word with Mary. In reality, he helped her  create her own garden project at Kew Gardens, the first designer for 250 years to be honoured this way.

Somehow DARE TO BE WILD is true to Reynolds’ spirit of preservation and protection, the desire to return to our naturalistic gardens and to the simple beauty of the environment, rather than the manicured phoniness of many of the showcased contemporary gardens where props have taken over from reality. AS