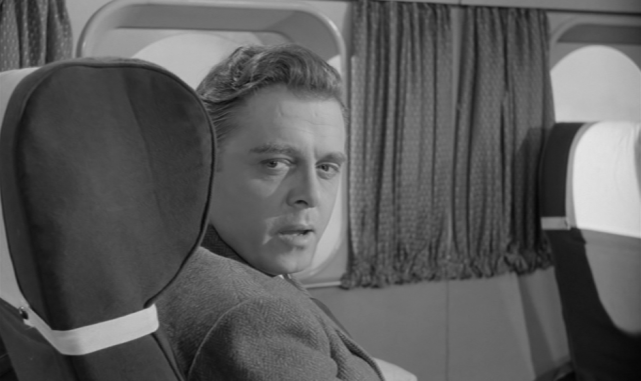 When Ernest Tilley’s (Attenborough) daughter is killed in a hit-and-run, he’s hellbent on avenging her death. Armed with a homemade bomb, he tracks down the killer to an airport and boarding the same flight, he threatens to be the first suicide bomber. Cy Endfield’s in-jet thriller relies on the dynamite performances to ramp up the suspense and he gets them from a brilliant cast including Attenborough playing against type as a sinister potential killer, driven insane by sadness. Oscar-winning cinematographer Jack Hildyard does a great job with the claustrophobic setting (the interior of a Russian Tupolev Tu-104) and Stanley Baker is masterful as the suave captain, who has his own sad history. Elizabeth Sellers is foxy and provocative (and still rocking on at 93); Sybil Thorndyke lightens the mood with a mildly humorous turn and there is also a touching romance between Virginia Maskell and the co-pilot to sweeten things as emotions boil over in this tightly-scripted classic full of interesting texture and superb vignettes, based on a story by Sigmund Miller. MT

Directed by John Paddy Carstairs (Trouble in Store) makes its much-anticipated arrival on DVD for the first time since its theatrical release in 1947. Filmed at Cromwell Studios, Southall.

In this classic British film Noir, childhood friends and army comrades Dave Robinson (Bill Owen) and Ted Peters (a young and earnest Attenborough at 23) turn out to be very different when they get back from the War. Ted gets an honest job as a taxi driver, and saves for his wedding to his childhood sweetheart (Sheila Sim). Dave, however, is a bit of a geezer who wants easy cash and soon gets involved with a gang. When Dave is found dead in the back of Ted’s taxi, suspicions fly as Scotland Yard investigate the murder. This is schematic stuff but beautifully-crafted with Reginald Wye’s velvet visuals (The Seventh Veil) and enlivened by a score of forties band classics including “Bow Bells” and Ben Frankel’s original score. Vintage pleasure. MT