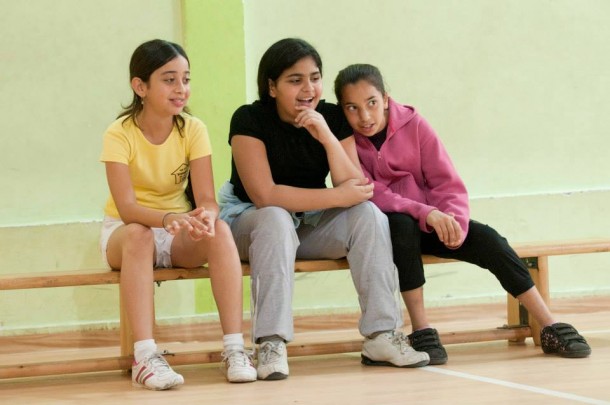 Hilla Medalia, whose recent documentary THE GO-GO BOYS: THE INSIDE STORY OF CANON FILMS was well received at Cannes this year, has accomplished something very rare with DANCNG IN JAFFA: a fair and at the same hopeful documentary about Jews and Palestinians living together in Jaffa. Pierre Dulaine, a world-renown ballroom dancer, was born here in 1944 to an Irish mother and a Palestinian father. In 1948, after the partition of the then British protectorate into Palestine and Israel, Dulaine’s parents had to flee with their young son, whilst the Israeli army occupied the town. Nearly 70 years later, Dulaine returns to his birthplace to teach Arab and Israeli school children to dance – together in pairs.

Four schools in Jaffa are chosen, only one of them, the “Weizman” school is a “mixed” school. Needless to say, the parents are much more suspicious than the children (the only hindrance at the start of project on the student level is that neither Israeli or Arab boys want to dance with the other gender). Words like “dancing with the enemy” are muttered by an Arab parent – Palestinian parents in general are not very keen that boys and girls should touch – never mind religion or nationality. At first, Dulaine’s approach is rather heavy-handed, but after inviting Yvonne Marceau, his dancing partner of 35 years, Yvonne Marceau, to help him with the lessons, the project takes off.

The political divide is always virulent: an Israeli taxi driver tells Dulaine that four of his best friends have been killed in the army and that he will never trust any Arab. And on Independence Day Israel celebrates whilst Arab students also have the day off, whilst their teachers call the same day “Nakba” (Day of Catastrophe). One of the Arab woman, whose daughter is active in the dance project, is visiting her family in Gaza for the first time in ten years – she had to wait for a visa so long because last time around she overstayed her visit by a few days. But there is humour too: hen one Israeli child answered a question about her father with “Mum got me from the sperm bank”, followed by a detailed report on the procedure her mother went through. An Israeli girl is invited into a deprived area of the town to visit her Arab dancing partner – a first! And a typical Jewish mother reminds her daughter “make sure that you win the competition”, whilst her daughter, far more relaxed answers ”No Mum, winning is not all”. (For the record, “Weizman” School won the dancing tournament). Today, two years after Dulaine (who has since departed) started his work, over one thousand children have danced together, with the project still on going.

Daniel Kedem’s able camera follows the long and detailed shots of the students dancing together and they are a joy to behold. But let’s not also forget the divided city: a slum-like existence for the Arab population, middle class properness for the Israelis. And even though DANCING IN JAFFA ends with a very sweet and hopeful shot of one of the Arab/Israeli dancing pair in a boot, the mistrust on both sides remains – and we feel that only one small incident could cause an explosion. AS

ON GENERAL RELEASE FROM 13 February 2015