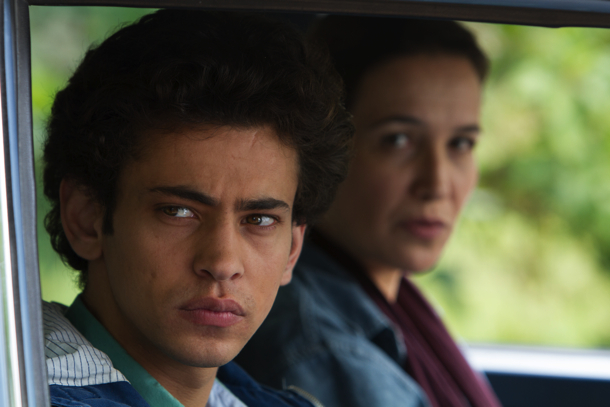 Israeli-born director Eran Riklis tries very hard to be impartial in this portrait of Israeli Arabs. After all, they represent a fifth of the whole population. Everywhere, anti-Arab slogans daub the walls and Israeli youth bully these second class citizens, quite apart from the widespread stop-and-search tactics of the police who spring out of the woodwork with surprisingly regularity.

Gifted teenager Eyad (Barhom), leaves his family in Palestine to study at a prestigious boarding school in Jerusalem. His family expects him to make up for his father, who went to university in Israel, but was arrested, imprisoned but never charged for terrorist activities. He is now working as a fruit picker and expects Eyad to ‘avenge’ him. Eyad’s Hebrew is weak, and he is teased (and worse) by his classmates. As part of the university programme, all the students have to do “social activities”, Eyad’s ‘case’ being Jonathan (Moshonov), a Jewish boy of his own age, who is suffering from muscular dystrophy and becomes Eyads only friend. Until that is, he meets Naomi, a Jewish girl from his college. The two fall for each other, and Eyad starts to forget a little about his roots. To make some money he uses Jonathan’s Jewish identity card so he can qualify as a waiter; Arabs work in the kitchens. When Jonathan’s mother finds out, she surprisingly encourages him. With Naomi, the dying Jonathan and his mother being closest to him, Eyad will have to make a decision about his identity, and his future.

DANCING ARABS takes its title from the saying, “that Arabs have to dance at two weddings”, meaning that they have to obey their religion and the rules of their family lives; but, if they want to succeed in Israeli society, they have to hide their roots, at least in public life. This leads to a schizophrenic state of mind, Eyad being a good example. Not only does he want to succeed for himself, he also carries the burden of his family’s expectations. But once away from his family’s influences, he soon discovers that love and friendship with Israelis can be a normal way of life. This film works best when exploring the relationship between Eyad and Jonathan, two outsiders, whose relationship is governed by equality. Eyad’s affair with Naomi on the other hand is less convincing, whilst his relationship with Edna, Jonathan’s mother, is very subtle – somehow replacing that of his own mother.

Lively cinematography offers panoramic shots of Jerusalem, intercut with newsreel images,showing the brutal war between Israel and the Arab world. Barhom is very convincing, and Moshonov plays out all the desperation of his ever shortening life. Riklis tries hard to be impartial, but in doing so, he sometimes has to resort to sentimentality. Still, DANCING ARABS is a worthy stab at reconciliation, even though the reality is much too grim for even such a small attempt at compromise – proven by the cancellation of the Open Air performance of this film in Jerusalem for security reasons. AS