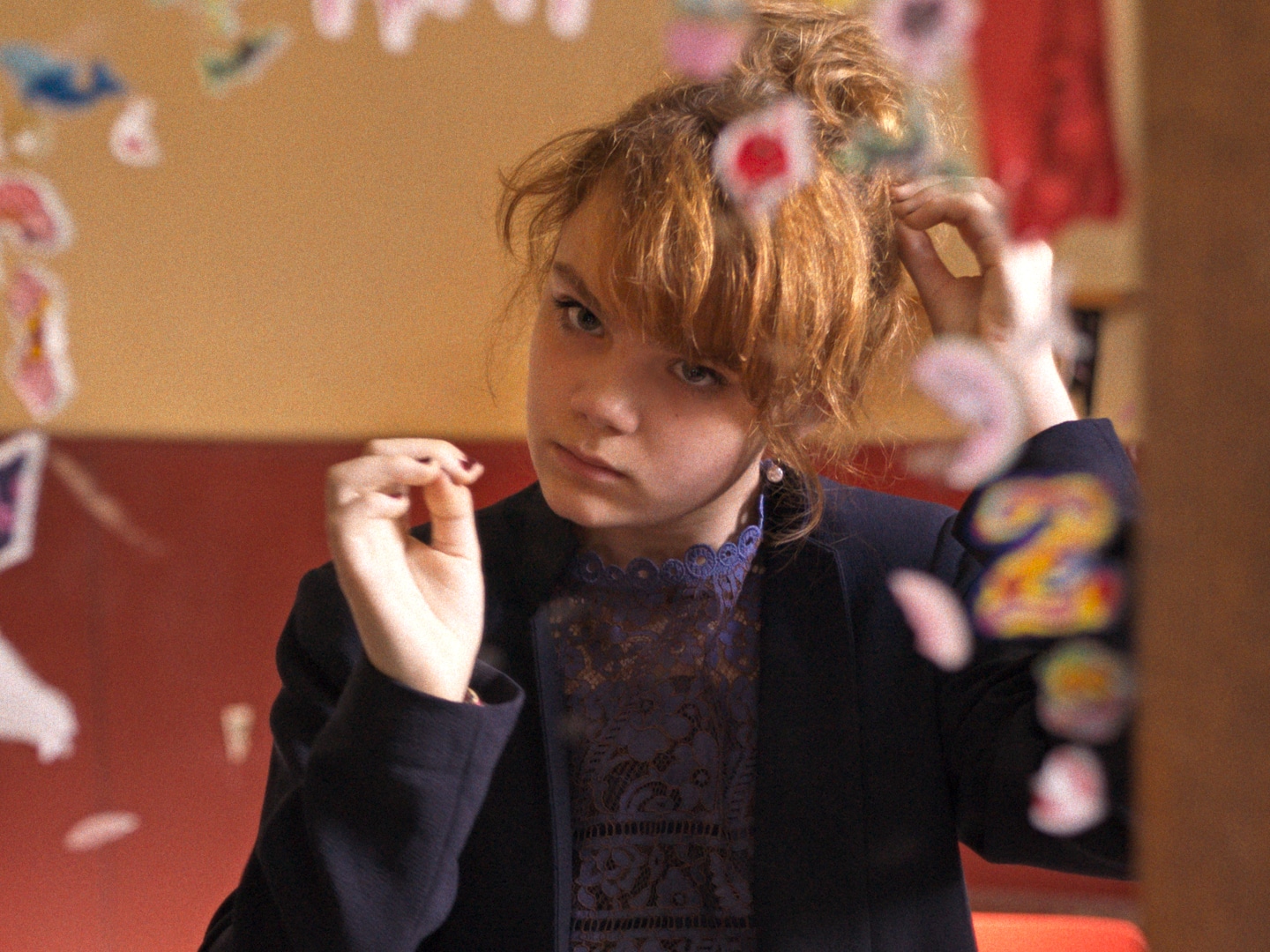 Emmanuelle Nicot wrote and directed this audacious first feature about a sensitive twelve-year old girl, the titular Dalva (Sansom), who has been sexually groomed by her incestuous father, the two sharing an intimate and outwardly loving relationship, more like lovers rather than father and daughter.

Nicot’s skills as a casting agent are key to her successful drama: Samson is totally convincing in the role of the outwardly shy and vulnerable young girl who has the assured gracefulness of a Geisha girl, knowing how to play every man she meets. Dressed titillatingly in lacy black dresses, drop earrings and stockings, she has clearly been a target for paedophile clients and the film’s violent opening scenes witness her being forcefully separated from her father (Coulloc’h) who has literally kept her to himself, moving rapidly from place to place, to escape the authorities, and her mother (Blancke).

She arrives, kicking and screaming, at the foyer for vulnerable females demanding to be re-united with her father. When she is told by her new carer Jayden (Manenti) that he abused her sexually, she claims: “But I never said no”. Isolated from the other girls, she tries several times to escape, and these scenes picture her negotiating walls in slinky evening dress. Brought back to the home, she befriends Samia (first timer Guirassi) who has been raised by a negligent sex-worker mother, the two offering each other complementary tips on how to survive the rough and tumble of the institution.

But Dalva has not given up the idea of seeing her father again, and she tries to manipulate Jayden with inappropriate sexual overtures, trying to seduce him into being a second father figure. Finally, the authorities give in, and Dalva is allowed to visit her father in jail, accompanied by Jayden. In a moving vignette, her father admits to being a paedophile abuser, destroying Dalva’s world for good.

Nicot directs with assurance, guiding Samson through the often upsetting confrontations. DoP Caroline Guimbal captures the ‘female gaze’ with her delicate images of Dalva’s interpretation of mature womanhood, keeping to the role her father has groomed her for, to perfection. It’s a performance within a performance. The close-ups of Dalva are particularly evocative, Samson has that rare ability of conveying strong emotion without over-acting, quite an achievement for one so young.

But Nicot is also honest enough to show the reasons for Dalva’s insistence at being a “wife” to her father, who is acting out against her mother, still frantically searching for Dalva. This portrait of evil shows a father poisoning his daughter against his ex-wife in allowing Dalva to believe she has succeeded in replacing her mother – just to make her even more malleable to his illicit intentions. Dalva takes the audience on a strange psychological journey: the long and painful way back to girlhood, after the enforced role of being an ‘adult’ sex object. Passionate, provocative and brilliantly executed.