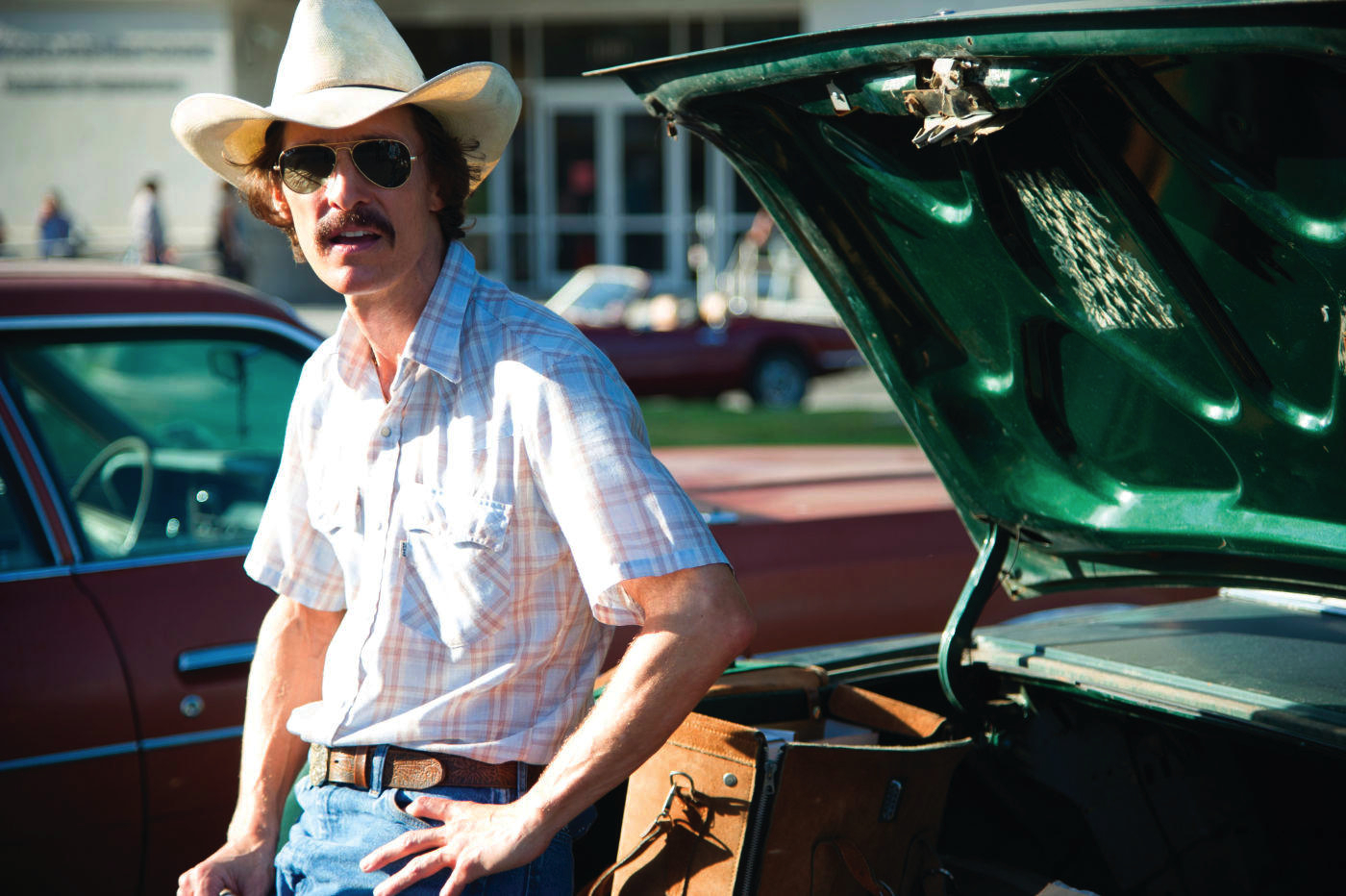 Canadian filmmaker Jean-Marc Vallee’s last film Cafe de Flore was a vibrant musical love story with an intriguing psychic twist. Dallas Buyers Club couldn’t be more different in theme but still has the same energetic gusto. It’s based on the true story of Ron Woodruff, a macho homophobe with a side-line in cattle-trading who lived hard and partied long until he found himself HIV-positive.  Set in the mid-eighties at the height of the AIDS crisis (with an atmospheric soundtrack featuring the music of Marc Bolan), the narrative kicks off in a rodeo, with a focus on Woodruff’s inveterate womanising and drinking ways.  Scriptwriters Craig Borten and Melisa Wallack’s angle is to tell an entertaining story of redemption where tragic circumstances in life bring out the best in their central character, rather than just focused purely on AIDS. And it works. Avoiding any kind of tear-jerking sentimentality or ‘why me’ negativity, it shows how Ron Woodruff’s  ‘death sentence’ causes him to take life by the scruff of the neck and search for a means to survive.  By refusing to give in to the doctor’s prognosis – that he has only 30 days to live, he grabs those days by the scruff of the neck and sets out to defy death.

Dallas Buyers Club is very much about living rather than dying and Matthew McConaughey’s performance is exultant in every sense of the word.  Kicking against the system, and doing battle with the medical authorities (the FDA and large pharmaceutical companies) he sets out to turn his life around. Transforming from a drinking, whoring, gambler to a clean-living seeker of ‘snake oil’ he teams up with Jared Leto’s rampant transexual Rayon, a person who previously he wouldn’t have given the time of day to, let alone worked with, to help other AIDS sufferers.  Both leads throw themselves into their performances (there was no time for rehearsal in a shoot that lasted less than 45 days)  McConaughey losing nearly three stone for the role and delivering an Oscar-worthy performance. He commented in the press conference: “It made me smarter. I lost 40 percent of my strength but added 40 percent to my brain power”.

The film follows a straightforward, almost documentary-style format, avoiding melodrama and taking an elliptical approach to the lives of its protagonists.  Where it works best is in portraying McConaughey as a gutsy hero with human failings who challenges authority and refuses to take ‘no’ for an answer, even when on death’s door in hospital with after a heart-attack and physical exhaustion.  In seeking alternative methods to fight the medical system, Ron Woodruff actually created his a “medical club” to help other AIDS victims: the ‘illegal’ provision of unregistered drugs to patients who had been failed by the American health system was thus made possible via membership of the club. Woodruff goes from a simple country red-neck cattle-trader to a slick international jet setter who negotiates drug provision from doctors in Mexico, Israel and Japan.

Despite his sleazy former self, which would make any normal woman run a mile, McConaughey’s Woodruff is at his most appealing and sympathetic in his relationship with a compassionate hospital doctor (Jennifer Garner) who he comes across through his initial hospital trial with AZT, and which almost turns into an unlikely romantic fling but then flatlines rather disappointingly.

As Rayon, Jared Leto makes a remarkably vulnerable yet streetwise transvestite and Denis O’Hare (as Dr Seward) and Steve Zahn (as Tucker) provide great support.  But at the end of the day, the Oscar should go to McConaughey for sheer indomitable dynamism in bringing the remarkable life of Ron Woodruff to the international stage. MT