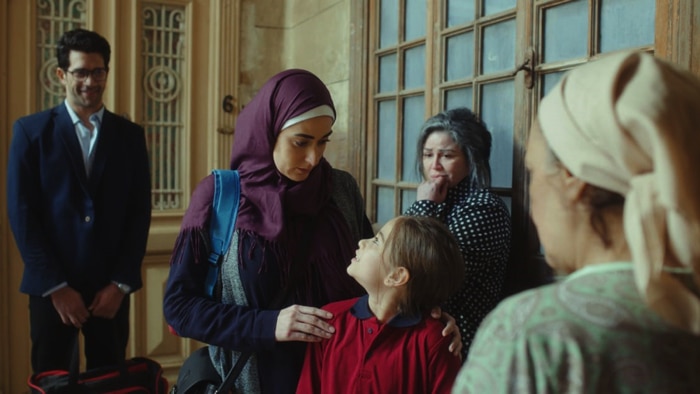 In this impressive domestic drama that won the main prize at this year’s Cairo Film Festival, Egyptian writer/director Amir Ramses takes on one of the biggest taboos in the Arab world: paedophilia. Flashbacks relating to the crime are coy but nevertheless disturbing considering the perpetrator is a senior member of his family, Ramses finding just the right balance to get his message across without upsetting the censors. s great to see veteran actor Elham Shahin back on the screen again, after so long,

Set in the autumn of 2013, the story revolves around an extended family in Cairo. Faten (Shahin) leaves prison after twenty years, having served time for the murder of her husband. Rumours say it was a ‘crime passionnel’ over her love affair with Yahia (El Basha), who – still lives – in the same apartment block – but the real motive has never surfaced.

Meanwhile, her embittered daughter Layla (Khalil) in waiting for her at the prison entrance with her husband Hassan (Magdy), a doctor in the local hospital. Layla has only visited her mother once in prison and is deeply resentful about her taking her father away from her. A local curfew makes it impossible for the former teacher to escape to her home in the country but she has her granddaughter Donia for company, and she also reconnects with Selma, Hassan’s niece. But Donia and Faten cross the line and reveal an unpalatable secret with tragic repercussions for all concerned.

Hassan is shown as an example of a progressive Arab man, Ramses  criticising working conditions for women: the nurses have only one way of promotion: a recommendation of a doctor – for which they have to pay with sex. His decision to stage most of the drama in domestic environments gives the feature an Ozuesque quality in its unity of space and time. The Curfew avoids sentimentality and dramatic overkill, finding a way to raise the profile of a society repressed by a cult of poisoned masculinity, camouflaging itself as religion. AS