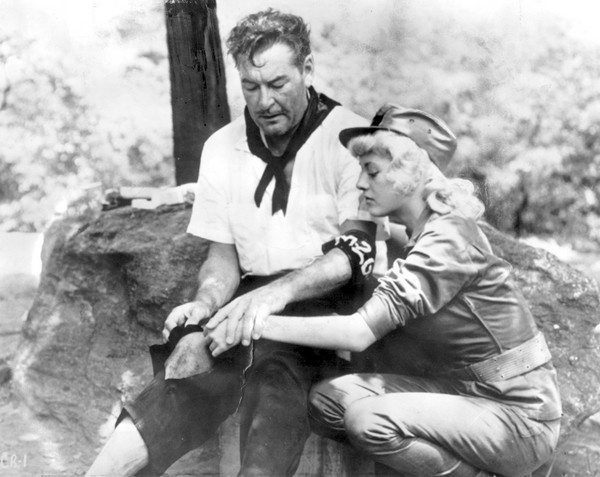 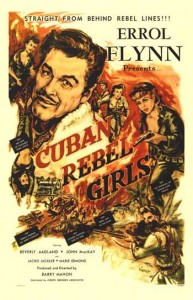 The CIA’s latest covert plot to bring about the death of Fidel Castro by simply waiting for him to die of old age at the age of 90 having finally borne fruit, Fidel is currently back in the news again and still sharply dividing opinion over his political legacy. As a reminder that as one door opens another often closes, we have this extraordinary time capsule recently uploaded online by Jimbo Berkey. Dating from those far-off days when Castro was still in the first flush of victory, before the implacable hostility of his powerful neighbour the United States pushed him into the clammy embrace of the Soviet Union, the film also marks the screen swansong of Errol Flynn, who died a burned-out 50 before it was released.

The title alone has ensured that while few have ever seen it, many are vaguely aware of the existence of this film and assume that it’s a turkey in the same class as Plan 9 from Outer Space. Anybody who claims that it is one of the worst films they have ever seen has, however, led a charmed life. Cuban Rebel Girls was made with the approval of the new authorities in Havana, and although the film’s miniscule budget is evident in the modest size of the fighting units depicted, it does boast historically interesting footage actually shot in Havana at the time of the revolution (when all those classic fifties cars that are still a feature of the Cuban capital were all brand new), as well as the use of authentic Cuban locations for the – actually well-staged – action sequences set in the surrounding countryside. First-time producer-director Barry Mahon does a perfectly competent job, enhanced by excellent photography by Merrill S. Brody. (Mahon was an RAF veteran and recipient of the Distinguished Flying Cross who met Flynn when he became his personal pilot and later his manager, and went on to become a prolific director of sexploitation films. Brody later shot the highly regarded but little-seen independent crime thriller Blast of Silence (1961), directed by Alan Baron, who was assistant director and has a small acting role in Cuban Rebel Girls).”

Flynn opens the film playing himself covering the revolution in Cuba as a war correspondent before stepping back to narrate the tale of two girls who sail from Key West to Havana with a consignment of guns for the revolution. One of the girls is the female lead Beverly Aadland, who notoriously was Flynn’s 16 year-old girlfriend at the time, and while she’s no actress, she manages to provide the film with some not entirely unintentional comic relief simply by looking so out of place. Resembling a ditzy Jill Ireland, she, by her own admission, doesn’t “even know who these guys Batista and Castro are”, but she has a boyfriend fighting for the rebels, and that’s good enough for her; while the speed with which she shows an affinity with firearms (“Sounds like fun, maybe I’ll get to shoot somebody!”) reveals her to be a true Daughter of the Revolution. True to the film’s title, the unit she belongs to has several other female members who look most fetching in their fatigues. Miss Aadland joins two of her comrades in a spot of nude bathing, but they are for the most part depicted without condescension as competent, level-headed and knowing the right way round to hold a walkie-talkie and a rifle; the doctor who later tends to Flynn’s wounded knee is a middle-aged woman. (The film actually compares very favourably in this regard to Xie Jin’s The Red Detachment of Women, made the following year in Red China, with which this would make an interesting double release on DVD).

Castro himself isn’t seen until we see him riding in triumph through Havana at the film’s conclusion, at which point Flynn reappears and in his very last ever appearance on film addresses these remarks to the camera: “Well, I guess this about winds up another stage in the fight to rid Latin America of tyrants – dictators. But the spirit started by this handful of wonderful rebels is spreading and growing stronger every day. And all you young men and women fighting for political freedom and your political beliefs everywhere, I wish you ‘Good Luck’.”

Although at 50 he looks very old, Flynn doesn’t really look particularly drunk, and his narration throughout the rest of the film is delivered firmly and with feeling. As screen farewells go, this final speech has a certain grace (it’s certainly a cut above “Now for Siam and a crack at those Japs!”), and overall Cuban Rebel Girls is far from the shaming experience for admirers of Errol Flynn that Big Jim Mclain and The Green Berets are for admirers of John Wayne. RICHARD CHATTEN