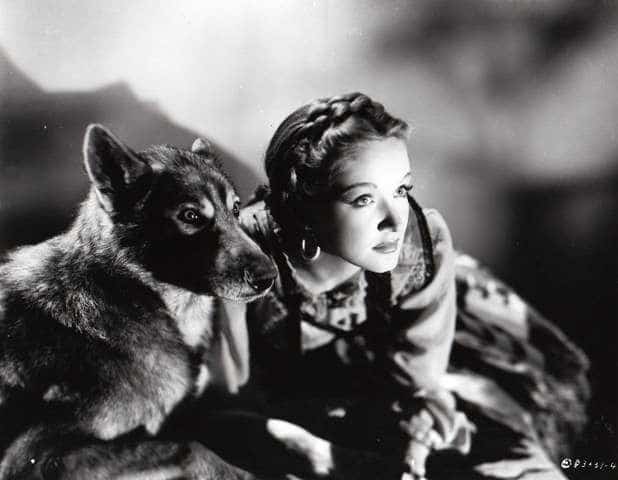 The rather unlikely directoral debut of Henry Levin, Cry of the Werewolf (a title not echoed by anything that actually happens in the film) is a quickie detective/horror hybrid from Columbia that owes more to Val Lewton’s films at RKO than Universal’s Wolf Man.

Borrowings abound from The Cat People, such as the click of high heels pursuing the hero below stairs at the funeral parlour. Lewton, however, would shrewdly have avoided showing us as much as the animal as we see here, which obviously isn’t a genuine wolf; and John Abbott’s vivid description on the soundtrack of the “master’s mangled body, over him stood a terrible animal, with flaming dripping jaws” is completely undercut by the inoffensive-looking doggie woggie we see nonchalantly padding off in the accompanying flashback.

The luxurious main set, lit with his usual aplomb by L.W.O’Connell, was probably recycled from an earlier production, along with the main theme from Castelnuovo-Tedesco’s score for The Return of the Vampire. As a pair of matriarchal lycanthropes, Nina Foch and the enjoyably malevolent-looking Blanche Yurka wouldn’t have looked out of place as members of the Palladists in The Seventh Victim, while – probably intentionally – far more electricity is generated between the remarkably youthful looking Miss Foch (who gets preposterously little screen time) and Osa Massen than between either of them and the incredibly boring hero Stephen Crane. Barton MacLane as a tough, no-nonsense detective conducts himself as if marauding werewolves are all in a day’s work for cops on the New Orleans beat. @RichardChatten