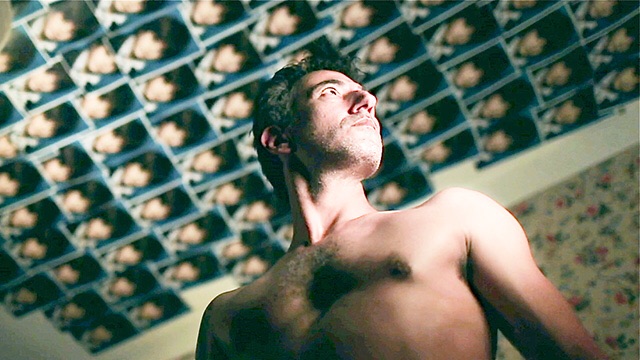 Do we really need another horror film about serial killing?: Too many sensational, violent and simply mediocre efforts have been flashed across the screen. But crime novelist Eric Cherrière’s debut CRUEL is different: not only has his film none of the attributes listed above, he has singlehandedly created a psychological portrait of a psychotic killer, which does not only throw light on the mental illness, but does this by allowing the audience to imagine, in images and words, how the process of killing can become a banal and rather ordinary activity for the murderer.

In Toulouse, Pierre Tardieu, is a casual worker of about forty. In the opening scenes he kidnaps the estate agent Sylvie Destruelle (Kerverdo), and incarcerates her in the cellar where his grandfather, ironically, used to hide Jews from the Gestapo. Pierre’s conversation with his victim is ordinary, he is not excited at all, in fact, his behaviour seems totally relaxed. He is detached (one of the symptoms of this form of schizophrenia), even when murdering his victim, commenting on his act of violence as if he were describing a banal household task. It becomes immediately clear that this is not Pierre’s first murder. Pierre roams like a lone wolf, experiencing life through a glass bubble: he is inside, looking out. Everything seems to dwarf him: the airplanes in the aircraft hangar which he has to clean, the huge conveyor belts in the quarry, where he is a nigh watchman. Pierre is absolutely rootless, the only emotional relationship he has is with father Gabriel (Poli), who is suffering from Alzheimers and cannot speak. Pierre, in a role-reversal, reads him ‘Treasure Island’ as a bedtime story.

After his random murders have reached double figures – Pierre has his own set of rules to ensure his killings stay undetected – he suddenly explodes with real rage, not only killing the intended victim, a groom, but all the members of the stag party. He later rationalises this as “giving the dumb police a helping hand” by leaving behind the cut up ID cards of all his victims. But the real reason for the slaughter is that Pierre “wants to amount to something”. He started the killing spree out of an inner emptiness. His main fixation is a last summer holiday with his parents in a Spanish village, where he dreamt of becoming a hero where he grew up  and “marry Mama, to become a father too”. Soon afterwards his mother was killed in a car accident. Since then Pierre keeps a diary in old-fashioned notebooks which he buys at “the librarian” (Meyer), an old friend of his father’s. Pierre’s life has been split into two: the real self (the child) looks for redemption in the world of childhood, the ‘false’ self (the murderous killer) compensates with violence against strangers (“never kill a person you know” is one of his rules) for his empty, emotionally undeveloped life as an adult. It is via the ”librarian” who introduces Pierre shortly before his death to Laure (Moreau) now a woman. Pierre remembers listening to her playing the piano when she was a child. In a final twist, Laure’s fiancée was Pierre’s first victim, chosen, like the other ones at random. Laure suggests a holiday in Spain, along the lines of the one he is fixated on with his parents. He takes with him one of the last notebooks with devastating results.

Jean-Hughes Lelté is utterly convincing and mesmerising as the killer, and the way he stumbles through an adult world, he can not grasp, is frightening. We see this reduced world through his eyes, and everyone apart from his father, are merely cyphers. Even though Pierre has a first sexual relationship with Laure, his childhood Ego is still the much stronger pull. Doomed, he lives out his phantasies to the end. Stunning camerawork and set pieces are provided by Mathias Touzeris and Olivier Cussac’s original score cleverly evokes the romantic lure of the past and the menace of the present.

Cruel is a stunning portrait of mental illness, dramatised as in a fictional way, but very close to reality. AS