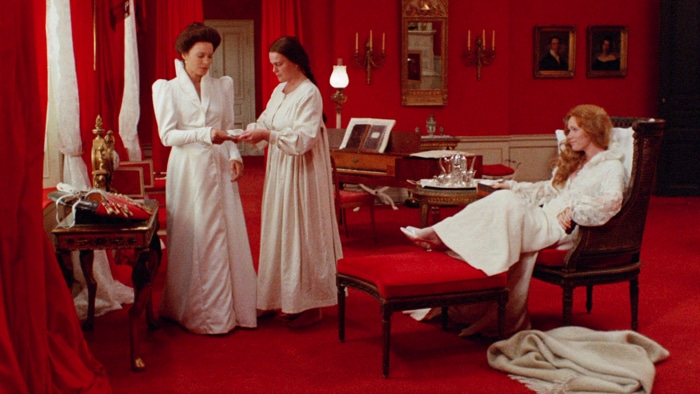 CRIES AND WHISPERS stands out in the Bergman canon and not only from The Touch (1971) and Face to Face (1976), which came before and after this 1972 outing. Like so many of Bergman’s films, they were straightforward relationship dramas. Cries takes us back to Bergman’s early features dominated by death and the human relationship with God, men and women living separate lives even after marriage. Yet Cries is also a horror feature, not least because the dissolves (replacing conventional cuts) are crimson red. Another point worth mentioning, is that

In rural Sweden Agnes (Andersson) is dying of cancer. Her two sisters arrive more out of duty than real concern. More caught up with their own lives, they don’t see eye to eye. Maria (Ullmann) is unhappily married to Joakim (Moritzen) and desperate to rekindle her affair with the family doctor, David (Josephson). Karin (Thulin) is aloof and lives with the cold-hearted tyrant Fredrik (Arlin). So the caring role falls to the maid Kari (Sylwan), who has already lost her daughter.

After Agnes’ agonising death, the vicar prays with Kari and the sisters, reassuring them  that Agnes’ faith was even stronger than his. Suddenly, Agnes comes back to life for a moment, asking her sisters to stay with her. Both decline, making spurious excuses to get back to their own families, and for a moment they make peace with each other. Kari offers Agnes her support. There is a positive denouement, even though the narrator, Agnes, can not be totally trusted.

The crux of the story is that Maria was the family favourite. Agnes can only remember getting her mother’s full and undivided attention on one occasion. But, crucially, she has left her diaries to Kari, who is touched by the gesture. Perhaps these will provide a clue?

DoP Sven Nykvist shot more than a dozen of Bergman’s features in black & white, and Cries was all about getting used to colour film, somehow also achieves a fairytale atmosphere. Ullman not only plays a sister, but also the role of mother to Agnes and Karin when they were children. Cries is probably not the most momentous of Bergman’s features, but it is certainly one of the most daring. AS