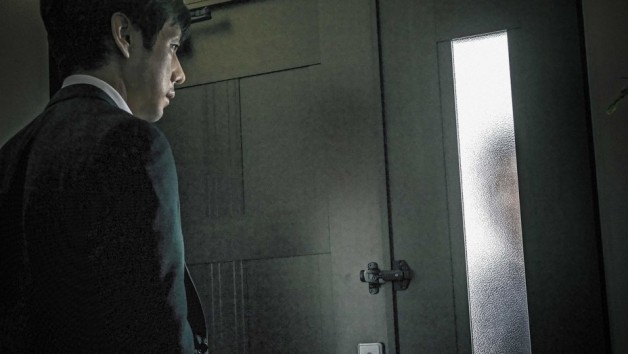 In his follow-up to the vapid floater that was Journey to the Shore (2015) Kiyoshi Kurosawa delivers an immersive and tightly-scripted psychological thriller, despite its rather weak ending. Conjuring up an unsettling atmosphere that keeps you tense for over two hours, all the usual horror tropes are there – plus some delicious tongue-in-cheek humour – in this story of a malign serial killer whose toxic power poisons everyone in his unholy thrall, based on the book by Yutaka Maekawa.

The story kicks off when the suave police detective Koichi Takakura (Hidetoshi Nishijima) interviews his suspect who later absconds in the impressive opening scenes. Fast forward a year and Koichi, now semi-retired to the countryside with his wife Ysauko (Yuko Takeuchi), is teaching criminal psychology at the local college. Desperate for another ride in the fast-lane, he is drawn into a local unsolved missing persons case involving a couple and their son who disappeared leaving their daughter Saki brain-washed by the tragedy. With his assistant Nogami (Masahiro Higashide) in tow, the two informally investigate proceedings. Meanwhile, his wife has curiously befriended their avoidant next door neighbour Mr Nishino (Kagawa from Tokyo Sonata) whose daughter denies that Nishino is actually her father. All this sounds intriguing – and it could have been so much more so – had Koichi been more in control of his faculties in managing the investigation. In the event, the main plot goes pear-shaped amid too many narrative twists and turns that dilute our terror transforming it into a state of baffled confusion.

Ambiance-wise Akiko Ashizawa’s lighting casts a claustrophobic pall that clings to every scene suggesting so much more than actually transpires. There are clearly some unresolved issues in this tight-lipped town and imagining their nature almost keeps the narrative ticking despite the rather disappointing denouement. MT