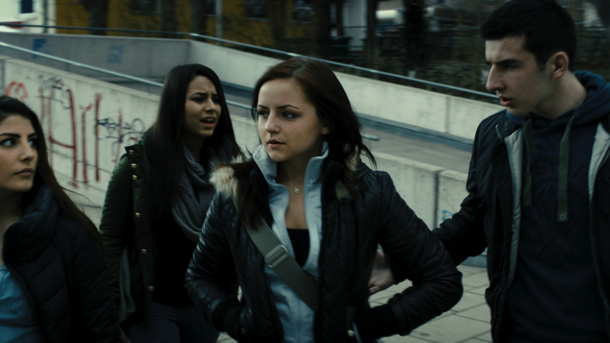 Best known for his work on 2007 Oscar-winner The Counterfeiters, Umut Dag’s drama explores the under world of a close-knit Turkish community in Vienna. Running along the usual lines of crims going against the grain of their previous misdemeanours to make good, it follows two men on a quest for acceptance and respect.  Ertan (Murathan Muslu) has served time for murder and is now on parole, Mikail is a teenage drug-runner for Yilmaz (Mehmet Ali Salman), and is hoping for a better life as a rapper.  But what makes this thriller really stand out from the crowd is the dynamic performances of the two leads Muslu and Tagaev.

CRACKS hits the floor running with a devastating opening scene where a middle-aged white woman is repeatedly slapping a heavy-set young man. Later we discover this was Ertan in an attempt to gain forgiveness from the mother (Margarete Tiesel/Paradise:Love) of his victim. Having fallen from grace with his father, brother and girlfriend, Ertan strikes a macho yet vulnerable figure in the ‘hood, and matters don’t seem to improve.  Meanwhile, Mikail is, in many ways, a younger version of Ertan and Dag’s narrative soon reveals that the ties run much deeper that initial appearances might suggest. But when Ertan gets a job in Mikail’s recording studio,  there is no doubt about their hidden connection, although at this stage Mikail is oblivious to the truth.

As a crestfallen antihero, Muslu is superb in a believable performance reflecting Ertan’s gradual descent into social hell, exquisitely etched in his myriad expressions of pain and dejection, as he reins back from violence and recidivism. The young Tagaev lacks Muslu’s acting finesse but projects a strong image of a broken teenager, gentle and fearful behind his ‘no-fear’ persona.

Shot through with its cool blue aesthetic, Georg Geutebruck’s agile ‘chiaroscuro’ camerawork skilfully captures both light and dark in a visually stylish thriller that races forward in the filmic ambience of a seedy concrete underworld, throbbing with sinuous energy and nightclubs throbbing with exotic totty and macho males. There’s a stunning sequence towards the end where Ertan is walking along the street, that makes you forgive Dag his slightly formulaic narrative in a feature that literally pulsates with the rhythm of life. MT

CRACKS IN CONCRETE SCREENED AT THE BERLINALE 2014