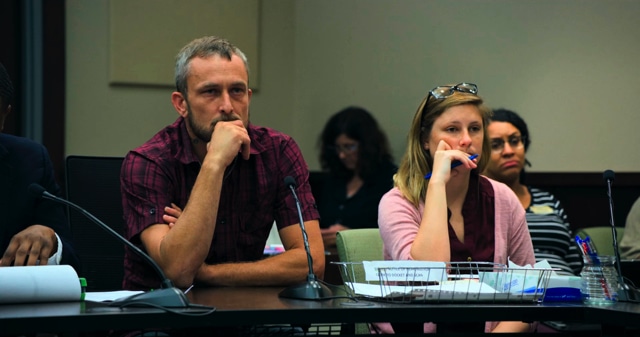 His first two features were fiction, Here and Now won the Cannes Critics Award in 2012. The titular court is the Tallahassee United Family Court, where families must appear when charged with negligence or even abuse against their minors. Although most court hearings in the US are open to the public, juvenile court hearings are usually held in camera – but the judge gave special permission to the filmmaker and his crew (mainly students) to be the flies on the wall for this astounding piece of filmmaking.

Shot in 30 days and consisting of Hearings and two trials, the emotional assault is huge. After all, parents are threatened with losing their children, jeopardising their most visceral human bond. While the children’s faces are blurred, the close-ups of the adults are often too painful to watch. Whatever might have happened before, mothers and fathers become fierce tigers when the chips are down, fighting to keep their young ones onside.

Speaking of the victims, the little ones are often desperate to be re-united with their abusers. The compassionate judge does his best to keep the families together, if at all possible. But there are exceptions if the child’s safety is threatened; the tears and sobbing of those parents who had hoped for a different outcome will stay with viewers for a long time. All this to the background of incessant noises: transcription keyboards and mobile phones tapping away.

A James Baldwin quote reminds us: “If one really wants to know how justice is administered in a country, one goes to the unprotected and listens to their testimony.” The director himself was at a critical point of his own life, which was also falling apart. “I was going through a divorce and a custody battle. Part of my survival was to make this movie and reflect on my own relationship with my children and responsibilities. You start to understand your faults and poor judgement – in the defendants I saw myself.” Even though filming meant catharsis, Esparza was still “afraid of documentaries, because I thought docs could hurt people to a certain extent. You deal with real people who can be offended by a movie.”

DoPs Barbu Balasooiu and Santiago Oviedo create a intense personal atmosphere with their close-ups, never falling into the trap of the Hollywood court drama. Far from being a set piece of dramatic arcs, this is cinema verite,  challenging the perceptions of its director and the audience. What could be a higher form of storytelling? AS