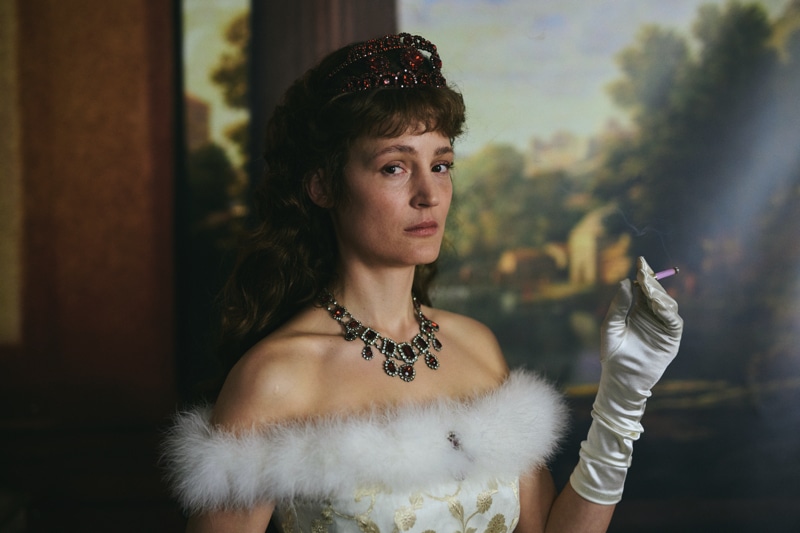 In her fifth feature Austrian auteuse Marie Kreutzer plays fast and loose with the memory of Empress Elisabeth of Austria in an entertaining and sumptuously realised film about the curse of beauty for a woman no longer in the flush of youth who still wants to be valued for her other talents.

Corsage blends tradition with contemporary touches, very much along the lines of Sofia Coppola’s Marie Antoinette, and lightly underpinned here by political references to the newly created Austro-Hungarian Empire.

Elisabeth, a fantastically theatrical creature – according to records – is played by a gracefully spunky Vicki Krieps. In modern terms she only just reached her prime, but back in the 1870s being forty was deemed ‘over the hill’. Kreutzer points at a regal middle age crisis for a woman who has been worshipped for her beauty and now feels distinctly undervalued and redundant with only her charity work, dogs and horses to keep her entertained. During a winter sojourn in Northamptonshire – an inspired choice – she flirts with a stable boy but returns minus her favourite black steed who is  killed in an accident. Elisabeth takes to her bed, unconsolable.

In the dilapidated grandeur of the palace a rigid diet of finely sliced oranges and black tea keeps her in impeccable shape, further assisted by waist-nipping corsetry. But she is hungry for love and affection and regularly visits the local mental asylum to commiserate with the deranged women chained to their beds. And when her husband the Emperor Franz Joseph (Florian Teichtmeister) offers ‘anything her heart desires’, she requests a bengal tiger or an extension to the asylum facilities. A stunningly realised drama with flashes of wit and modern music choices and another tour de force from the lovely Luxembourgeoise actor Vicki Krieps. MT