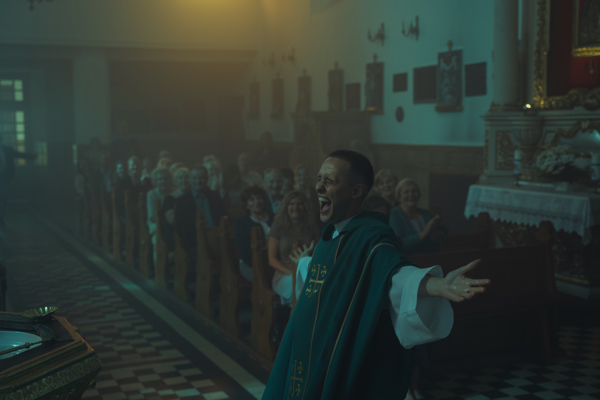 Director Jan Komasa (Warsaw ’44) adapts Mateusz Palewicz’s extraordinary story about a 20-year-old juvenile criminal impersonating a priest in Poland. In small town Jasliska, just south of Krakow, the past is catching up with the townspeople forcing them out of the past and into the present. Piotr Sobocinski brings the whole thing to life with his vibrant camerawork reflecting the prejudices of provincial life in this intricate and outstanding feature drama.

Twenty year old Daniel (Bielenia) lives in a juvenile correction institution where he experiences something of a spiritual awakening under the influence of one of the more charismatic priests Tomasz (Simlat) whose sermons have a such a dramatic effect of the young man he feels a calling towards the priesthood. Sadly his criminal past bars him from taking the cloth. Unperturbed, Daniel sets out  his destination, where he is to join a sawmill, owned by Walkiewicz, a friend of Tomasz. One glimpse of the place from the outside is enough for Daniel to change his mind. In church he meets Eliza (Ryembed), the daughter of Lidia (Komieczna), who helps the resident priest Golap (Wurdejn). Daniel tells Eliza that he is a priest, producing the full regalia stolen from Tomasz, and they agree to take him on.

Whilst Daniel learns about taking confession from the internet on his mobile, he is drawn into a recent tragedy: six young people died in a head-on collision with a car, driven by an alcoholic called Slawek. It was forbidden to bury Slawek in the cemetery, and his wife Barbara (Kurzaj) and the victim’s relatives have made sure the priests stick to their word. Although Eliza’s brother was one of the victims, she has doubts about Slawek’s guilt. Daniel too feels Slawek was hard done by and proposes to bury Slawek in the local cemetery. But Walkiewicz wants to keep his workers happy, and again opposes the plan. And he is not the only one. Daniel meets resistance from Pinczer (Zietek), whose brother he killed in a fight.

Komasa changes the perception of Palewicz’s novel subtly: whilst Daniel believes in his role, and tries to be humble, the majority of his parish show anything but Christian spirit and only a few following Slawek’s coffin to the grave. Corpus Christi is a mature, wise and refreshing portrait of religious bigotry, emotionally enthralling the audience for the whole two hours. AS