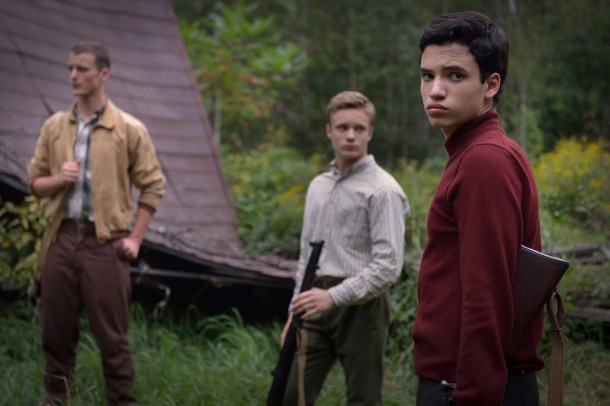 Montreal in the late sixties: the French-speaking minority are being repressed by the Anglophone majority in the rest of the county – English rules, not only in parliament. The “Liberation Front of Quebec” (FLQ) also holds sway in the region of Quebec. It’s a radical underground organisation, not unlike the “Baader Meinhof” Group in Germany and the “Red Brigades” in Italy, which followed in their footsteps by the end of the decade. The FLQ are using violence in the pursuit of their target: they want to bomb their way to independence from the rest of the country. Like the European groups that followed, the movement attracted, disaffected young people, mainly romantics from middle class backgrounds. Corbo is one of these young men.

Quebecois director, Mathieu Denis’s observational and linear narrative drives his elegantly-styled, classicly-framed drama forward. Jean Corbo (Anthony Therrien) is a shy boy who felt alienated even in his own family and persecuted in school, were he is a misfit due to his Italian origin. At home, Jean’s father is a Liberal careerist lawyer who does not want to be reminded by his son the Italian population of Canada were put in camps after the outbreak of WWIII. His older brother agitates for the “Quebec Independence Party”, a very tame outfit, compared with the FLQ. As is happened so often in “revolutionary” circles, alliances are often the result of love affairs (successful and failed ones), and Jean also falls first for Juliet (Tremblay), and joins the FLQ to impress her. Unfortunately for him, Jean has to prove to himself and the leading theorists of the movement that he is not a pampered result of middle class upbringing. And whilst Juliet and another comrade are not ready to use violence any more, after a woman is accidentally killed in a bombing, Jean develops a radical mindset that leads to tragic consequences.

Denis is careful in his characterisation of Jean, making him neither a hero nor a villain – just a mixed-up kid who wanted to impress his girl fr show his family that he was their equal, not the baby. His politics were immature, his longing to be a revolutionary founded on sentiments alone. CORBO shows the leaders of the FLQ (who, in 1970 would kidnap and kill a minister of the Quebec government and a British diplomat), as manipulative and remote. Therrien is convincing as Jean, showing youthful vulnerability and daredevil tendances. Denis and his cinematographer, Steve Asselin, capture the details sensitively, crafting the oppression of the secure, middle-class world Jean is desperate to escape. CORBO is a powerful and truthful portrait of a romantic soul lost in power games that lead to drastic consequences for all concerned. AS